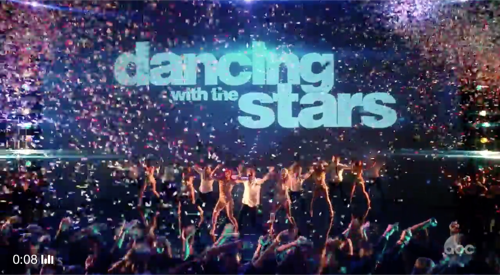 On tonight’s DWTS episode as per the ABC synopsis, “Dancing With The Stars is back with its most dynamic cast yet and ready to hit the ballroom floor. The competition begins with the two-hour season premiere. The premiere episode will kick off with the largest scale opening number ever, shot with the pros at Griffith Observatory. “

Each couple will perform a Jive, Foxtrot, Cha Cha or Viennese Waltz, vying for America’s vote for the first time. No couples will be eliminated on week 1, and they will all advance to week 2 of the competition. So we will get to see two weeks of dancing before anyone is eliminated.

Make sure to bookmark this spot and come back from 8PM – 10PM ET for our live coverage of the Dancing With The Stars Season 23 premiere.  While you wait for our recap make sure to head over and check out all our DWTS recap, spoilers, news & videos, right here! In the meantime hit up our comments section and tell us  if you have any favorites going into the premiere!

Tonight’s DWTS Season 23 premiere opens with a super-sized opening number with the pros at Griffith Observatory.

Tom Bergeron begins by introducing the celebs who will be performing this season.

Judges comments: Len, “I gotta say season 23 we’ve had 23 celebrities come out and do the opening dance.  I have to tell you about yours fully of energy, straight into the routing fabulous!” Julianne, “Doing the jive straight out, tough, quick it was super sharp your excitement was great, careful not to get too stiff!” Bruno: “Love to see someone who comes out as a trouper love to see that.  Derek week 1 you are going to kill her be careful not to tighten up.”  Carrie ann: What a way to represent you were so in control you did not miss a step!”

Judges comments: Len: “You know what’s great about the show you never know what shows up but James that was knock out a lovely mix of steps you knocked me out.”  Julianne: “That was calm, graceful, smooth breath of fresh air.”  Bruno: “Oh yes, you first class!  The ease of move, like you were the king of the room, not a bother in the room!  I cannot wait to see you in Latin!”

Judges comments: Julianne: “I think you broke the record for the brightest smile I have ever see.  You guys look great together.  But honestly, I was impressed.”  Bruno: “Forget Megatron you are Cha Cha tron – Big personality!” Carrie Ann: “You have the footballer magic, you lit up the whole room.  Truth is you have a little work to do but great job!”

Judges comments: Bruno: “Relax you are here.  You move very well.  Now that you have gotten started, relax more, nice and easy smoother footwork.”  Carrie Ann: “I think your vulnerability will serve you well.  But, trust Artem a little more he is going to guide you well.  Trust that!”  Len, “I love your enthusiasm there was beautiful movement.  You need refinement. Work on the details.”

Judges comments: Carrie Ann: “You are so right at home in the ballroom. All the vibe worked perfectly you lit up the stage.”  Len: “Style with a smile.  Plenty of razzle dazzle.  You are going to go places.”  Julianne: “Work on your rise and your fall.  It was timeless it was classy, just like you!”

Judges comments: Julianne: “Okay, so I am looking at your right now and your face is lit up and it is beautiful and smiling but I missed it in the routine. Make sure you use your face like your body.”  Bruno: “There is much more to you than I expected.  You have natural grace.  You disconnect.”  Carrie Ann: “From a woman to a woman you are stunning your energy is fabulous, you have so much confidence.  You need to trust it.”

Judges comments: Len: “Respect Man! You came out and you gave it a go people think I am a fuddy tuddy I loved watching it but there was not enough Cha Cha Cha!” Julianne: “That made me so happy I cannot tell you.  The Cha Cha that was there I saw you are an awesome dancer I want to see more content.”  Bruno: “That was tonight’s ice-breaker you still got it.  The next time open the curtain and show us more content.”

Judges comments: Bruno: “Can you do it over again I wanted to make sure I was not having an x rated fantasy.  I cannot wait to see your Rumba.”  Carrie Ann: “It was certainly not traditional Viennese Waltz and you don’t have to work on sexy.  The lines are there when you get the strength it is going to be incredible.”  Len: “I was not transported to old Vienna it was all too dramatic.  Just get out there you have so much talent.”

Judges comments: Julianne: “Unfortunately, it looked like you were trying to keep up with Jenna.  Work on your feet.”  Bruno: “Go for it, even if you go wrong.  You just messed up your footwork.  Next time will be better.”  Carrie Ann: “You two are so cute you lost her hand in the beginning and you got out of sync.  Next week will be better.”

Judges comments: Len: “It was a little bit pedestrian but I have to say you have never danced before lots of recognizable Cha Cha Cha.”  Julianne: “Well in doubt go full out.  You were hitting your lines, messed up a few times but..”  Bruno: “Not exactly subtle.  I’m telling you it is the timing.  Timing is very important for you, work on that.”

Judges comments: Carrie Ann: “I did not see a little person, I saw a huge star.  Every kick and flick in right place.”  Len: “Just had a baby you delivered twice in a month.  Small in stature but big in heart!  Well done!”  Julianne: “You are a firecracker you are born to entertain!”

Judges comments: Bruno: “You looked the part I thought I was watching a condensed version of The Bachelor.  Your limbs are not use to dry land.” Carrie Ann: “What you brought to the ballroom is all you have to see.  You did your best!” (Note: they had to take a break people were booing someone came on stage and security came.)  Tom said they had an incident and security was called.  Ryan says he was a little hurt, he came out with a smile to dance.   Carrie Ann continues, “You gave it your best, you have  alot to work at.  We are only here to judge your ballroom dancing.”  Len, “You came out and performed to a high level people should be proud of you!”

Judges comments: Carrie Ann: “I have never seen Val so happy.  You are awesome that was wonderful.  You have this incredible sparkle.”  Len, “That had plenty of energy,  a terrific dance and a great way to finish the evening.”  Julianne: “That was a great Cha Cha but work on our hips.  You are the total package.”  Bruno: “Delighted to see someone with your talent in this room!”