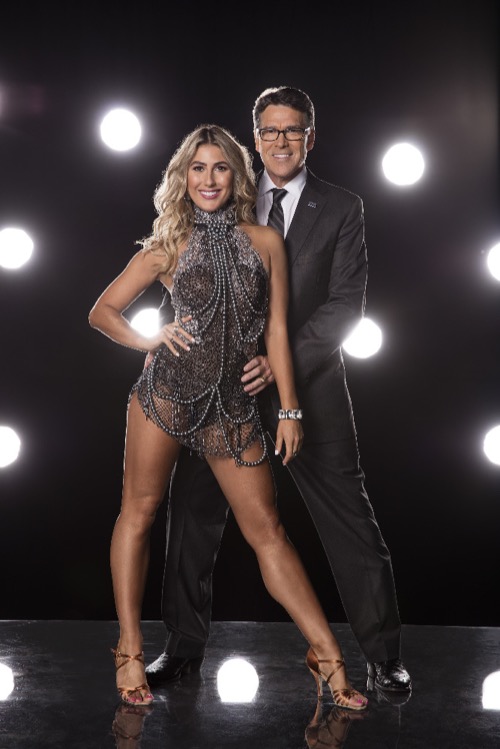 Tonight on ABC the glitz and the glamour returns to the ballroom as Dancing With The Stars returns for a 23rd season. Former Governor of Texas Rick Perry & her professional dancer Emma Slater took the stage tonight and danced a Jive to “God Blessed Texas” by Little Texas. Did you watch tonight’s DWTS episode? If you missed it we have a full and detailed recap, right here for you. Did you miss any of tonight’s performance videos? If you did we have them all, right here for you!

Rick is very excited about dancing and tweeted a message to his twitter fans to encourage them to vote for him and Emma, she tweeted, “@emmaslaterdance and I are ready to hit the dance floor tonight! Watch @DancingABC 8/7c #DWTS VOTE #teamdanceforourvets: 1-800-868-3410″

Judges comments on Rick Perry’s DWTS Premiere Cha Cha: Len: “It was a little bit pedestrian but I have to say you have never danced before lots of recognizable Cha Cha Cha.”  Julianne: “Well in doubt go full out.  You were hitting your lines, messed up a few times but..”  Bruno: “Not exactly subtle.  I’m telling you it is the timing.  Timing is very important for you, work on that.”

Watch the video below and let us know what you think, do you agree with the judge’s comments? Do you think Rick did enough to avoid elimination next week? Make sure to head over and check out all our DWTS recaps, spoilers, news & more, right here.