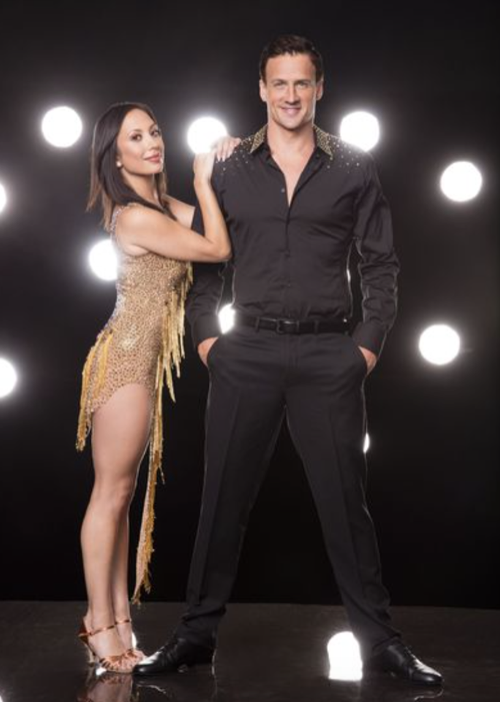 Tonight on ABC the glitz and the glamour returns to the ballroom as Dancing With The Stars returns for a 23rd season. American competitive swimmer and a 12-time Olympic medalist Ryan Lochte & his professional dancer Cheryl Burke took the stage tonight and danced a Foxtrot to “Call Me Irresponsible” by Michael Bublé. Did you watch tonight’s DWTS episode? If you missed it we have a full and detailed recap, right here for you.  Did you miss any of tonight’s performance videos? If you did we have them all, right here for you!

Ryan is very excited about dancing and tweeted a message to his twitter fans to encourage them to vote for him and Cheryl, he tweeted, “SO excited for the premiere of @dancingabc tomorrow! Retweet if you’ll be watching @CherylBurke & me at 8|7c. #DWTS”

Judges comments on Ryan Lochte’s DWTS Premiere Foxtrot: Bruno: “You looked the part I thought I was watching a condensed version of The Bachelor.  Your limbs are not use to dry land.”Carrie Ann: “What you brought to the ballroom is all you have to see.  You did your best!” (Note: they had to take a break people were booing.)  Tom said they had an incident and security was called.  Ryan says he was a little hurt, he came out with a smile.   Carrie Ann continues, “You gave it your best, you have  alot to work at.  We are only here to judge your ballroom dancing.”  Len, “You came out and performed to a high level people should be proud of you!”

Watch the video below and let us know what you think, do you agree with the judge’s comments? Do you think Ryan did enough to avoid elimination next week? Make sure to head over and check out all our DWTS recaps, spoilers, news & more, right here.