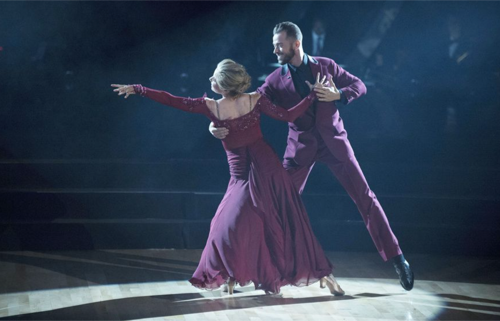 Tonight on ABC the glitz and the glamour returns to the ballroom as Dancing With The Stars returns for the second episode of the 23rd season. Actress & Author Maureen McCormick & her professional dancer Artem Chigvintsev took the stage tonight and danced the Quickstep to “Brady Bunch Theme” for their TV theme song. Did you watch tonight’s DWTS episode? If you missed it we have a full and detailed recap, right here for you.  Did you miss any of tonight’s performance videos? If you did we have them all, right here for you!

Maureen is very excited about dancing and tweeted a message to her twitter fans to let them know how she is doing, “#DWTS @artemchigvintse “Artem,Artem,Artem! It’s always Artem,Artem,Artem!” Loooove my partner”

Judges comments on Maureen McCormick’s DWTS Season 23 Week 2 Quickstep: Len: “Well you know what I like you captured the flavor of the TV show.  The technique was better!  Well Done!”  Julianne: “I second that from last week to this week you are so much better.  Work on the body contact.  Such an improvement!”  Bruno: “Oh my Darling it all worked well deliciously well pitched and 1970s feel.  Very nice, much better!”  Carrie Ann: “There looked like there was one thing but your confidence was so much better.  There was one moment when you almost made a mistake but well done!”

Watch the video below and let us know what you think, do you agree with the judge’s comments? Do you think Terra did enough to avoid elimination tomorrow? Make sure to head over and check out all our DWTS recaps, spoilers, news & more, right here.