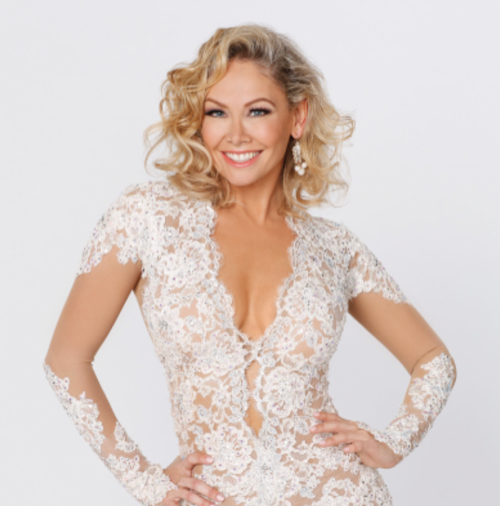 Kym Johnson has agreed to co-host for Erin Andrews who has requested for some time off to be with her boyfriend, Jarret Stoll and his family after the tragic loss of his nephew, Miami Marlins pitcher, Jose Fernandez this past weekend.  The sudden death of Jose Fernandez, the 24-year-old baseball star, has shocked and impacted the sports world, after a horrific boating accident over the weekend.

For those of you unfamiliar with Kym Johnson, she was one of the professional dancers on Dancing with the Stars for 14 seasons and is one of the judges on the Australian version of the dance competition.  The last season we saw Kym on the dancing competition was Season 20.  Kym Johnson was paired with Robert Herjavec, and their chemistry was felt by all.  They revealed during Dancing with the Stars’ 20th season that they had taken their dancing partnership off the dance floor.

Fans might also remember that Kym Johnson had announced recently that she has hung up her dancing shoes after she married Robert Herjavec this summer.  Kym Johnson isn’t the only television star in the family.  Her husband is a businessman known for his television roles on Canada’s Dragon’s Den and ABC’s Shark Tank.

Dancing with the Stars’ Erin Andrews posted this tweet, “Thank you to my @DancingABC Family for supporting me while I take the week to be w/ family.  Can’t wait to be back in the ballroom next week.”

We would like to offer our condolences to Erin Andrews, Jarret Stoll and his family, and look forward to Erin’s return to Dancing with the Stars.

Be sure to tune into ABC’s Dancing with the Stars Monday nights to catch up on all the exciting performances, and also remember to return on Tuesday nights to see who had the lowest ratings and which couple will be eliminated.