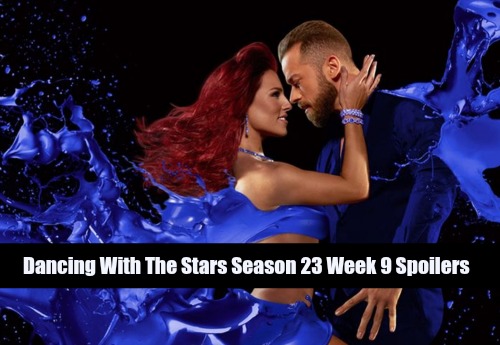 The ‘Jersey Boys’ stars will perform ‘December 1963 (Oh, what a Night)’ as Marilu Henner and Derek Hough dance the samba.

Jana Kramer and Gleb Savchenko have a disadvantage during Broadway Week because Gleb suffered a knee injury during a recent rehearsal. The duo is scheduled to dance the waltz to ‘She Used to be Mine’ from ‘Waitress.’

More ‘Dancing with the Stars’ 23 spoilers for Broadway week reveal that Laurie Hernandez and Valentin Chmerkovskiy will dance the Argentine Tango accompanied by the ‘Cell Block Tango’ from ‘Chicago.’

Terra Jolé & Sasha Farber are set to dance the Charleston to ‘If My Friends Could See Me Now’ from ‘Sweet Charity.’

Last, but not least, ‘DWTS’ 23 spoilers reveal that James Hinchcliffe and Sharna Burgess will take to the dance floor with a jazz routine. The duo has chosen ‘A Brand New Day’ from ‘The Wiz’ as their song.

The couples will perform a second dance where they are paired up for a “Team-Up Challenge.”  The teams are: Team-Up #1: James & Sharna/Calvin & Lindsay – Paso Doblé – “No Good” by Kaleo;  Team-Up #2: Jana & Gleb/Laurie & Val – Contemporary – “Bird Set Free” by Sia and Team-Up #3: Marilu & Derek/Terra and Sasha – Jazz – “Big Noise from Winnetka” by Bette Midler.

‘DWTS’ fans are you excited about Broadway week? Who do you think will make it through to the next round? Do Marilu Henner and Derek Hough have an advantage because the guys from ‘Jersey Boys’ will be on hand to perform ‘December 1963 (Oh, What a Night)’?

Could Leona Lewis singing ‘Memory’ from ‘Cats’ garner high marks from the judges and fans for Calvin Johnson, Jr. and Lindsay Arnold?

Who are you rooting for during ‘Dancing with the Star’s Broadway Week? Who do you think is headed home?

Excited to have @MarkBallas perform with the Jersey Boys on Monday’s #DWTS! pic.twitter.com/rtRFRfDlFM

@megatron and @hinchtown are the last men standing this season. Comment 👋🏽 if you’re cheering on this team Monday! #ShowStoppersNight