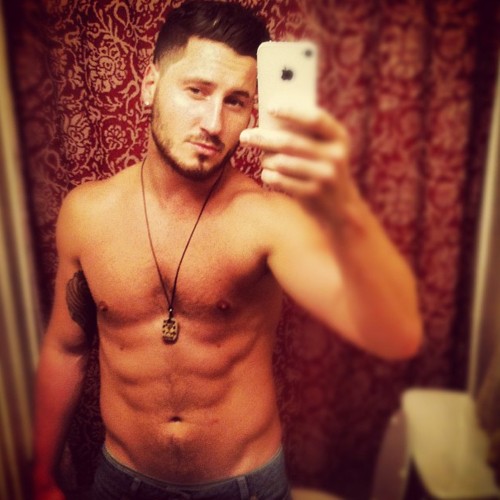 After Val Chmerkosvkiy and Ginger Zee’s performance last night on Dancing With The Stars, E! Online caught up with them backstage. When asked about Michal Strahan joining Ginger on Good Morning America, she raved about how excited she was to have him on the team. Zee dished, “We’ve had him obviously for a couple of years, a couple days a week. I love Michael Strahan and he’s going to be a great addition and he’s wonderful!”

Of course, Michael Strahan joining Good Morning America has left his co-star Kelly Ripa in a lurch on ‘Live! With Kelly.’ A few named have been tossed around, but ABC is still actively searching for a new co-host for Kelly – especially with Strahan’s final air date right around the corner.

While chatting with E! Online, Val Chmerkosvkiy revealed that he is interested in the job and he thinks he would make a great news anchor. Val joked, “Look, I’m in. Michael is going to come on Dancing With the Stars, and I could go and help out with Kelly Ripa. There you go, problem solved!”

That might be a casting decision we could get behind. What do you guys think, would Val Chmerkosvkiy make a good news anchor? Who would you like to see join Kelly Ripa on Live? Let us know in the comments below and check out all your DWTS news, recap and dances here at CDL!