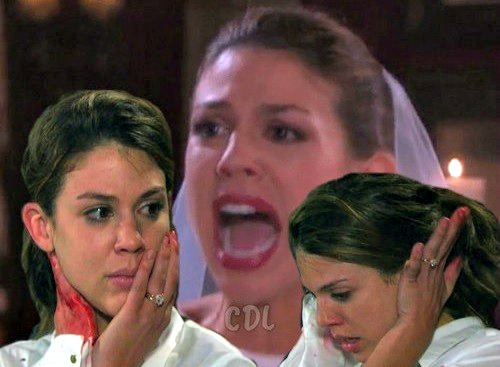 “Days of Our Lives” (DOOL) spoilers reveal that Abigail (Kate Mansi) will commit herself to a psychiatric facility in hopes of getting a grip. Ever since Ben’s (Robert Scott Wilson) escape, Abigail’s sanity has been slipping away. She completely lost it when she finally came face to face with Ben at the mansion.

Abby really hopped the train to crazy town when she tried to burn Ben to death. Since Ben survived the ordeal, Abigail still isn’t doing well. She doesn’t feel safe and it’s affecting her ability to care for Thomas.

As a result, Abigail will check into a suitable mental institution. DOOL spoilers indicate that Chad (Billy Flynn) will support Abigail every step of the way. He’ll want Abby to know that she’s not alone in this. Abigail will want to do what’s best for her family, but she’ll still be fearful of taking this leap.

It’s a big decision and she won’t be sure it’s the right one.

Chad will assure Abigail that Marlena (Deidre Hall) knows what she’s talking about. Deep down, Abigail realizes this is what she needs to move forward. “Days of Our Lives” spoilers suggest that we’re in for more heartbreaking scenes as Abigail tries to accept the situation.

Fortunately, Abigail will have some extra help as she gets settled in. Anne-Marie Johnson will debut in the role of Dr. Robinson on Tuesday, April 26. She’ll serve as a psychiatrist who’s going to treat Abigail over next few months. “Days” spoilers say Dr. Robinson will try to calm Abigail’s nerves and assist in this adjustment period.

Abigail will air through at least May, but she could have some scenes in early June. We’ll give you updates if we hear any news about the exact date of Abby’s departure. Many DOOL viewers are going to miss Kate Mansi in the role, but it looks like a recast may appear as early as September.

Stick with “Days of Our Lives” to see how Chad copes without Abigail in Salem.

So “Days” fans, what do you think about Abigail’s upcoming mental institution stint? Is this an inventive way to write out the character? Will you miss Kate Mansi’s version of Abby? Are you anxious to see who will replace her?