Days of Our Lives (DOOL) Spoilers: Aiden and Andre Make a Deal – Andre Released from Jail, Puts Hope in Danger

BY Heather Hughes on May 12, 2016 | Comments: one comment
Related : Days of Our Lives, Soap Opera, Spoiler, Television 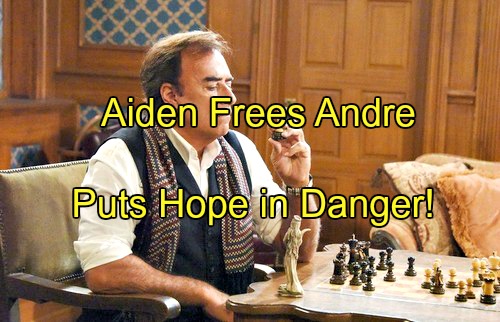 “Days of Our Lives” (DOOL) spoilers tease that on this week’s episodes Aiden (Daniel Cosgrove) will be released from police custody. It appears the DNA test will prove that Aiden wasn’t the one who tried to kill Hope (Kristian Alfonso). Once Aiden is free to go, he’ll immediately visit Andre (Thaao Penghlis). There are a few things they need to get straight.

Naturally, Aiden will rip into Andre for replacing him with a doppelganger and holding him captive for months. Nevertheless, what’s done is done and Aiden is just trying to salvage what’s left of his old life. DOOL spoilers indicate that Aiden will need Andre’s help if he wants to pull this off.

In a surprise twist, Aiden told Hope a little fib about when he was kidnapped. “Days” viewers know that Aiden was snatched just before he was set to murder Hope. That means Aiden considered doing it right up until the big moment arrived.

However, that’s not how Aiden explained it to Hope at all. Aiden claimed that he was taken shortly after he proposed. He said Andre grabbed him after they danced at Edge of the Square. Lying to Hope is undoubtedly a bad idea. This is sure to trip Aiden up later.

Still, that’s Aiden’s story and he’s sticking to it. “Days of Our Lives” spoilers say Aiden will want Andre to back up his claims. He needs to minimize his shadiness if he wants to win Hope’s heart. Andre will agree on one condition: Aiden has to get him out of jail.

Luckily, Aiden is a top-notch defense lawyer. He should have Andre out of the slammer in no time. Of course, Aiden will demand that Andre leave Hope alone. Fat chance that’s going to happen. Whether Aiden knows it or not, he’s inevitably going to be used as a pawn in Andre’s revenge scheme.

Bottom line, Aiden is stuck in an endless cycle of deception. It’s looking more and more like Aiden is simply meant as angst for Rafe (Galen Gering) and Hope. If Aiden pulls the wool over Hope’s eyes again, she could be in for additional shock and heartbreak. Hope might give Aiden a second chance and live to regret it.

Will all of this drama make Hope fall right back into Rafe’s arms? We’ll have to wait and see, but we probably shouldn’t give up on “Rope” just yet. DOOL may let Rafe be Hope’s knight in shining armor. Stick with “Days of Our Lives” for updates on what’s in store for this love triangle.

So “Days” fans, what do you think about the news that Aiden is still lying to Hope? Are you bummed that Hope could get duped again or do you prefer Aiden as a shady character?