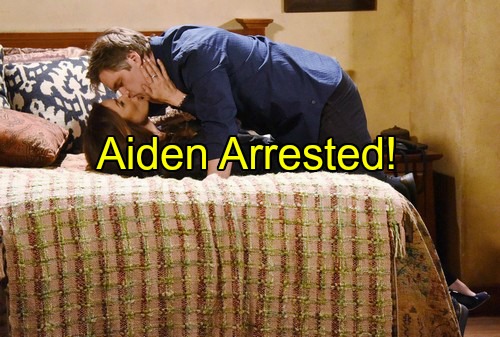 Days of Our Lives (DOOL) spoilers tease that Hope (Kristian Alfonso) is in for a rude awakening. Hope has been trying to grow closer to Aiden (Daniel Cosgrove), but it’s proving rather difficult. She can’t get her mind off Aiden’s doppelganger and her horrible wedding night.

Of course, Hope doesn’t know that Aiden came very close to doing the deed himself. He was swapped minutes before the murder attempt took place. If Aiden had been able to muster up just a hint more nerve, he would’ve tried to strangle Hope.

We can’t forget that Aiden altered the insurance info shortly before the wedding as well. He secretly changed everything so he’d be the beneficiary when he killed his new bride. Days spoilers say Rafe (Galen Gering) will convince Shawn (Brandon Beemer) that Aiden is hiding something.

They’ll compare Aiden’s latest blood sample with one taken when he got the marriage license.

DOOL spoilers indicate that Shawn and Rafe will grow fearful when they get the results. They’ll determine that Aiden has been lying the entire time. Aiden actually married Hope and intended on getting rid of her.

In other words, Hope is still in danger. Days of Our Lives spoilers suggest that Shawn may deliver the startling news. Hope will be furious with both Aiden and herself when she discovers that she was duped once again.

After receiving updates on Aiden’s shadiness, Hope will go on the warpath. She’ll track Aiden down and arrest him immediately. Days spoilers say Hope will confront Aiden with the evidence and demand to hear the truth straight from him. Aiden will quickly understand that there’s no way out of this mess.

Aiden will come clean and beg Hope to forgive him. He’ll insist that he loves Hope and he figured she’d never give him another shot if she knew the whole story. Hope will likely fire back that Aiden is exactly right. She would’ve thrown Aiden’s butt in jail from the get-go.

Regardless, Hope needed to have all of the facts if Aiden truly expected them to have any kind of relationship. He should’ve known this would catch up with him sooner or later. After their explosive confrontation, Hope will feel guilty about dumping Rafe for this loser.

She’ll realize that she made a terrible mistake.

Days of Our Lives spoilers reveal that Hope will want to make things right. She’ll try to contact Rafe so she can apologize and hopefully reunite. Unfortunately, Rafe will be locked away in the cellar of the abandoned DiMera property. Andre (Thaao Penghlis) told Aiden that he’d take Rafe out of the picture and he intends on doing it – with a bomb.

Hope will find out Rafe’s location and rush over to save the day. On the bright side, this daring rescue could help Hope make up for her poor decision. Rafe has never been particularly bitter anyway. He’s simply been waiting for Hope to come to her senses.

After this distressing ordeal is over, will this couple have a second chance? We’ll see Rafe and Hope move forward eventually, but don’t expect Andre to give up. DOOL spoilers hint that Andre has plenty more tricks up his sleeve.