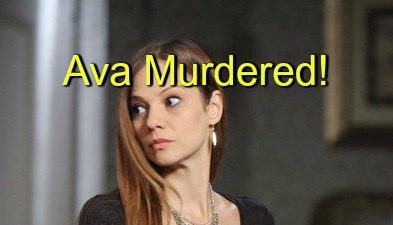 “Days of Our Lives” (DOOL) spoilers reveal that another murder will shock Salem on Friday, February 26. We’ve seen plenty of killings over the past few months and the blood bath isn’t over yet. There’s no official confirmation on which Salemite will bite the dust, but Ava (Tamara Braun) might be a safe bet. Based on the storyline developments that are in the works, she seems like a logical candidate.

DOOL spoilers tease that Ava will send Kayla (Mary Beth Evans) a video of her encounter with Steve (Stephen Nichols). Naturally, Kayla will be livid. Ava forced Steve to have sex with her and Kayla will want her to pay. When Kayla confronts Ava, they’ll get into a physical altercation. Ava will accuse Kayla of attempted murder and that’s where things could take an interesting turn.

Steve and Kayla will fear that Ava’s setup might work. “Days of Our Lives” spoilers say they’ll worry that Kayla could get locked up thanks to Ava’s accusations. The stunning murder is set to occur the next day. Since Ava will have cried wolf at that point, Kayla could be a suspect if Ava actually turns up dead.

Of course, that would be a little too easy. Kayla would almost certainly be wrongfully accused. The same goes for Steve. If Steve was going to kill Ava, he probably would’ve done it already. So who would that leave as our murderer? As horrible as it sounds, Joey (James Lastovic) may be the one to take Ava out.

“Days” viewers know that Joey fell in love with Ava while they were trying to push Steve and Kayla back together. Joey was furious when he learned that Ava had tricked him and he was even more furious when he saw Steve kissing Ava. Once Joey learns that Steve and Ava had sex, he’s going to hit the roof.

Could Joey kill Ava in a moment of rage? It’s a possibility. We shouldn’t be too concerned for this teen though. Joey isn’t going anywhere and it’s doubtful he’ll be sent to prison for any lengthy period of time. If Joey does the deed, perhaps he’ll get away with it.

A second option to consider is that Ava could fake her own death. This may be Ava’s strategy for achieving the ultimate revenge before she goes. However, Ava seemingly foreshadowed her demise when she spoke about wanting a one-way plane ticket to “FINAL destination: Salem, U.S.A.” Ava was practically putting the nail in her coffin right then and there. It looks like this could be the real deal.

The murder should be coming right around the time of Ava’s expected exit, so it appears to be a good fit. Nevertheless, DOOL has been known to throw in some surprises. Anything’s possible on the NBC soap. We’ll give you updates as we learn more details. Stick with “Days of Our Lives” to see how this murderous plot unfolds.

So “Days” fans, what do you think about the news that another character will be murdered? Do you suspect it might be Ava? Voice your opinion in the comments below and don’t forget to check CDL often for the latest “Days of Our Lives” spoilers, updates and news.