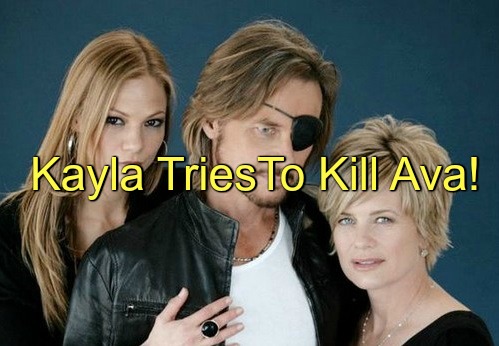 “Days of Our Lives” spoilers reveal that Ava (Tamara Braun) has much more in store for Steve (Stephen Nichols) and Kayla (Mary Beth Evans). They were hoping that the blow of losing her son would send Ava to mope elsewhere, but that’s not going to be the case. After crying on the floor for hours, Ava pulled herself together and now she’s ready to make a bold move.

Ava bought a one-way ticket back to Salem, so that tells us that she plans to park it there for a while. Steve and Kayla aren’t going to be pleased when they hear the news that Ava is back in town. DOOL spoilers indicate that Ava will do all her usual taunting. Steve will undoubtedly start to sweat when he realizes Ava could spill the details of their hookup at any moment.

Steve felt he had no choice but to sleep with Ava, but Kayla could still feel betrayed when she gets updates on their romp. “Days of Our Lives” spoilers tease that Ava will deliver a startling message to Kayla. Could Ava gloat about having sex with Steve? It sounds like a possibility.

Of course, Ava is a pretty unpredictable character. When someone is this crazy, you never know what to expect.

Kayla will certainly be stunned by what comes next. “Days” buzz suggests that Kayla and Ava will get into another heated argument. It appears that things may get physical. Kayla will likely be filled with rage. Ava has turned Steve, Kayla and Joey’s (James Lastovic) lives upside down. Kayla will want Ava to pay for everything she’s done.

Unfortunately, Ava will try to spin the situation in her favor. Something will happen that causes Ava’s outrageous response. “Days of Our Lives” spoilers say Ava will insist that Kayla tried to murder her. This is the same woman that bashed Kayla in the head and apparently locked her up without food or water for days. If anyone needs to be accused of attempted murder, it’s Ava.

Nevertheless, Ava will shout that Kayla tried to take her life. Will Ava try to press charges? If she does, it’s doubtful anything will stick. Ava is clearly the villain in this scenario and Roman (Josh Taylor) knows it.

DOOL buzz hints that Ava’s last air date may be coming up around the end of this month or possibly in early March. Stay tuned to the NBC soap to see how Ava will make her exit.

So “Days” fans, what do you think about the news that Ava will shock Kayla with an unexpected message? Will Kayla learn that Steve and Ava slept together? What about Ava’s attempted murder accusation? How will Kayla react? Voice your opinion in the comments below and don’t forget to check CDL often for the latest “Days of Our Lives” spoilers, updates and news.