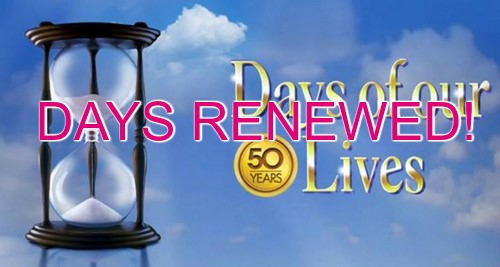 The report from Deadline reads, “Days Of Our Lives, which marked its 50th anniversary this season, has been renewed for next season, which will be the long-running daytime drama’s 51st. The pickup, which I hear may include an option for an additional year, keeps NBC in the daytime soap game as Days is the last remaining afternoon drama on its schedule.”

This means that Days is renewed into September 2017 with NBC retaining an option for another year renemal! This is HUGE news for “DOOL” fans – who have been in a state of panic lately over the negotiations at NBC. President Jennifer Salke released a statement a few weeks ago insisting that they were optimistic about a renewal after the soap’s recent spike in ratings during Daniel Jonas’ traumatic death.

But, that didn’t stop “DOOL” fans from worrying – especially after reports hit the internet this week that the writing staff at the daytime drama was told to put their pens down and quit writing for a while. And, there were also supposedly some issues over the production schedule.

Regardless of what is going on behind the scenes – with the writers and production – we can confirm that ‘Days Of Our Lives” isn’t going anywhere this year, and “DOOL” fans can finally get a good nights’ rest.

So, are you as thrilled as we are about “DOOL’s” big renewal? Do you think that their ratings will continue to get higher, or is this extra season just delaying the inevitable demise of NBC’s last remaining daytime drama? Let us know what you think in the comments below and don’t forget to check CDL for all your “Days Of Our Lives” spoilers and news!