Days of Our Lives Spoilers: Contract Battle Between NBC and DOOL Producers – Dispute Over Production Model 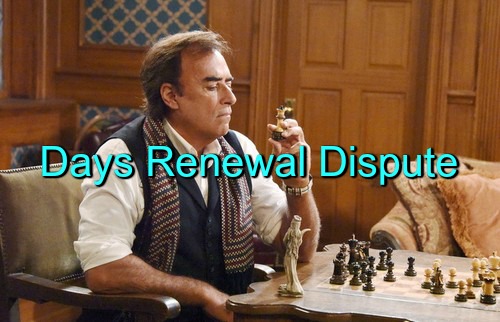 “Days of Our Lives” spoilers reveal that negotiations are still underway for a DOOL renewal. It was recently reported that “Days” writers had been ordered to stop writing until a deal was reached between Sony, Corday Productions and NBC. Today we’re hearing news that’s a little more positive.

Daytime Confidential says that multiple sources have dished details on the status of “Days of Our Lives.” Although no deal has been made, they’re at least trying to work out a mutually beneficial agreement. Unfortunately, that’s easier said than done.

It seems a major issue has been DOOL’s unusual production model. The show currently tapes nearly six months ahead, which presents a real problem for fans and NBC. If a storyline or character isn’t working, there isn’t much they can do about it. Sure, they can make the changes on set, but the onscreen results will still be months away.

NBC is pushing for a production model that mimics the ones used for other daytime dramas. By taping closer to air, “Days of Our Lives” could make the adjustments that the network wants. Of course, there’s another side to every story. DOOL isn’t using this model just to get on fans’ nerves. It’s all about saving money.

“Days of Our Lives” started using this taping schedule a few years ago because it fits their budget. It allows for more dark weeks and has ultimately proven more cost-effective. Now NBC is asking Sony and Corday Productions to change what’s helped the show stay afloat.

In other words, there are pros and cons to switching the production model. DOOL could fade fast if the new taping schedule costs more money. However, making a deal now would likely be the top priority. There’s no point in worrying about what lies ahead if “Days of Our Lives” can’t secure a renewal.

If NBC gets its way, we’ll probably see budget and casting cuts to make up the difference. Bottom line, it isn’t going to be easy for the execs to reach an agreement on what’s best. The important thing is that they’re talking about the soap’s potential future.

Most of us would agree that we just want to keep our show around! Stick with CDL for updates on how these negotiations progress.

So “Days” fans, what do you think about the news that NBC is pushing for DOOL to tape closer to air? Are you on board with that idea? Would the positives outweigh the negatives or would it be risky for a struggling soap?

Is a renewal all that really matters? Voice your opinion in the comments below and don’t forget to check CDL often for the latest “Days of Our Lives” spoilers, updates and news.