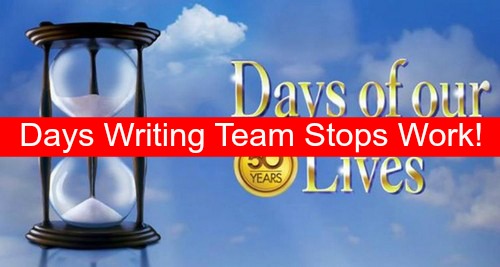 “Days of Our Lives” spoilers reveal that the show is currently stuck in limbo. According to Daytime Confidential, DOOL writers have been ordered to stop writing until Sony, Corday Productions and NBC can reach a deal. “Days” viewers have been getting nervous about the soap’s future due to the fact that there’s been no word on an official renewal.

Since “Days of Our Lives” tapes so far in advance, show has already been written through September 2016. There’s no point in writing any more material until a renewal is confirmed. This news definitely has fans on edge. Everyone is hoping that the execs will come to an agreement and give the greenlight on more DOOL episodes, but you just never know.

Of course, we shouldn’t panic just yet. Serial Scoop reported last month that an inside source claims a renewal is “a done deal.” It might just be a matter of formality. Still, nothing is certain in the soap biz. We’ve seen how quickly things can be shaken up behind the scenes.

If “Days of Our Lives” does manage to secure a renewal, we’ll probably see them tighten the purse strings. More cast and budget cuts could be coming. Nevertheless, most of us will take any version of the show we can get. There are only four daytime dramas left on the major networks and it would be a shame to lose one more.

It would likely be a good move to keep DOOL around. We’ve seen an abundance of talk shows canceled on networks that gave older soaps the boot. Plus, there’s no doubt that many “Days of Our Lives” viewers would switch over to other soaps if the sands run out of the hourglass.

Let’s just hope that Salem sticks around and we’ll hear the official renewal announcement soon. We’ll keep our fingers crossed that a deal is being made as we speak. Stay with CDL for updates on negotiations and any confirmation that might be on the way.

So “Days” fans, what do you think about the news that DOOL writers have been ordered to stop writing until a deal is reached? Are you nervous about the fate of the show?

Do you still feel hopeful about a renewal? Voice your opinion in the comments below and don’t forget to check CDL often for the latest “Days of Our Lives” spoilers, updates and news.