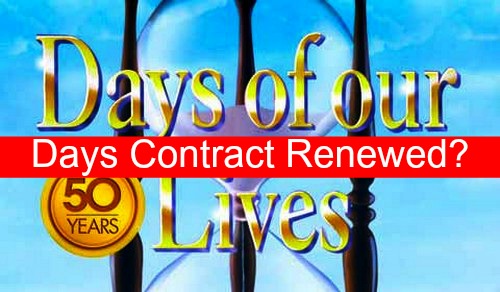 “Days of Our Lives” (DOOL) spoilers indicate that the time has not yet run out of DOOL’s iconic hourglass – it looks like a renewal is in the works for the 50 year old soap and this should be a major relief for die-hard fans. Looks like Days of Our Lives is likely to be renewed!

NBC entertainment president Jennifer Salke told TVLine, “They’re an incredible group and we love the show. They got a [ratings] bump in the fall for their 50th anniversary. There’s a creative resurgence and exciting storytelling going on right now.”

Formal renewal negotiations won’t start until next month and the current DOOL broadcast contract expires in September 2016. Because of how far in advance soaps shoot, filming for the current contract period would be done by March or April.

One sure sign of a renewal will be if we still see tweets and updates from the DOOL set after spring has sprung. Days has had some ratings trouble and lingered at the bottom of the heap of the four network soaps, jockeying between third and fourth place with “General Hospital.”

Both shows have been consistently outdone by “The Bold and The Beautiful” and “The Young and The Restless.” However, some major storylines have seen a bump in DOOL ratings recently including Bo’s death, Hope shooting Stefano in revenge over his death, the death of Daniel and more.

The last DOOL renewal was for a two-year deal but some emails in the major SONY hack last year revealed that network executives were evaluating replacing Days with lower cost talk shows but worked out a renewal deal that came with a sharp cut in licensing fees.

Hacked emails also revealed network criticism of the cost of promoting the DOOL 50th Anniversary book which was referred to by SONY executive VP Chris Elwell as “that dumb book.” A possible red flag on the renewal deal, though, is the recent and abrupt exit of Kate Mansi from her role as Abby Deveraux.

But with ratings up year-over-year by 3%, NBC’s Salke is “optimistic” about a renewal and said “We would like the show back.” Now it’s all down to the SONY negotiations – and the viewers. If ratings stay strong, renewal is much more likely.

What do you think DOOL fans? Are you excited about the positive renewal chat? It sounds like the higher ups at NBC are confident that they’ll get another year of DOOL out of SONY in the upcoming negotiations.

It looks like the cancellation talk is premature and odds are in favor of at least one more season – will you be watching? Stay tuned to CDL for more “Days of Our Lives” spoilers and news.