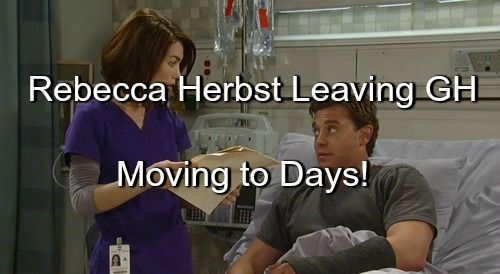 General Hospital spoilers tease that Rebecca Herbst (Liz Webber) is leaving the ABC Soap opera, and possibly checking in to Salem to star on the NBC soap opera Days Of Our Lives. Rebecca Herbst is currently front and center on ‘General Hospital’ – and has been for nearly a year, the daytime drama basically revolves around her love triangle with Jason Morgan and his wife Sam.

GH fans have made it very clear they are not fans of Rebecca’s character Liz Webber on social media as of late – and it looks like Herbst isn’t really a big fan of Liz Webber either!

According to an exclusive report from Daytime Confidential, Rebecca Herbst and TPTB at General Hospital “have reached an impasse in contract negotiations.” It’s unclear whether the disagreement is over money, or more importantly the direction that they have taken Rebecca’s character Liz.

There have been rumors for quite some time that even Rebecca has had enough of the Jason Morgan love triangle.

The website goes on to tease that SONY soap Days Of Our Lives would be more than happy to take Rebecca Herbst off ABC’s hands – and they are “keen on bringing the popular actress on board their canvas.” DOOL has had a tough time in the ratings department lately, and bringing a big name actress like Rebecca on board could definitely help them out.

Plus, with Alison Sweeney gone, Kate Mansi on her way out, and Kassie DePaiva’s most recent exit – they could definitely use a strong new female actress.

What do you think soap opera fans? Can you imagine General Hospital without Rebecca Herbst – she has been on the daytime drama for 19 years! Do you think that if she leaves they will recast the character, or just write Liz Webber out of Port Charles all together? Can you picture her on Days Of Our Lives? Let us know what you think in the comments below!