BY CDL Staff on August 22, 2015 | Comments: one comment
Related : Days of Our Lives, General Hospital, Soap Opera, Spoiler, Television, The Bold and the Beautiful, The Young and the Restless, Twitter

General Hospital spoilers reveals a nasty Twitter exchange between Bryan Craig and a rude troll going by the handle DiMera87 that has resulted in Bryan threatening violence and then deactivating his Twitter account. It’s not a secret that Bryan Craig (Morgan Corinthos, “General Hospital”) has his share of haters. He tweeted last night that he can’t wait until those who have negative things to say about him sees the wonderful things they are doing on “GH” lately. His comment prompted his haters to come out of the woodwork and start a Twitter brawl that lasted a good 12 hours.

It all started when a Twitter member, @DiMera87, targeted Bryan Craig by saying, “Bryan Craig is sh*t.” Craig’s parents came to his defense and instead of putting a stop to the insults, it escalated further. DiMera87 responded to his mother’s tweet by saying, “Someone better get his mother under control. The whole family is full of idiots. It really explains a lot” The insult directed to Bryan Craig’s mother did not go over well with his father. He responded by putting him on notice; stop posting about his family or be prepared to come face-to-face with him. 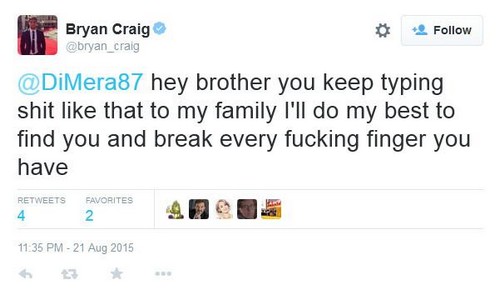 Bryan tried to smooth things over with his fans. It was clear he felt like he lost control over of his emotions when his hater tried to bait him in an argument. He told his fans that people can talk about him all you want, but to him family is off limits. Minutes later, he posted has since deleted, a threat to DiMera87. He told him, “Hey brother, you keep posting sh*t like that about my family, I’ll do my best to find you and break every f***ing finger you have.”

Immediately, he deleted the tweet. He realized he went too far and thanked his fans for being supportive. He said he loves him family and implied that talking badly about triggers an angry response in him. He decided to take a break from Twitter. Many of his fans have voiced their support for him. Many felt he dealt with the ordeal the best he could. Maurice Benard (Sonny Corinthos, “General Hospital”) replied to his tweet by telling him to ignore the haters. His said to use their hate to inspire him to prove them wrong.

One can understand that the Twitter member may not like Bryan, but baiting his family was out of line. He told his father, Donnie Craig, that he needs to put his son in rehab, his wife needs a psych evaluation, and he needed anger management classes. Even still, his followers (DiMera87) believe that it is the Craig family that has the problem.

DiMera87, also known as Chris on Twitter, has stated he believes that Bryan should lose his job over the exchange. He thinks he crossed the line and continues to try to make him look like a fool by retweeting the exchange. The ordeal quickly spiralled out of control and caused Bryan Craig and his mother to deactivate their Twitter accounts. At a time when General Hospital ratings are suffering and the show is trying to get back it’s feet this is last thing anyone but the troll wants. CDL’ers, you decide; whose side are you on, Bryan Craig’s or DiMera87’s? Social media attracts cowards and bullies who can behave in a repulsive manner and then hide under the anonymity afforded by the medium. Of course Bryan, as a celeb professional, should have been aware of this and simply ignored the creep. This is reminiscent of Eric Braden Twitter fights we have covered. Of course Morgan Corinthos is no Victor Newman and, we assume, can get away with less from TPTB.