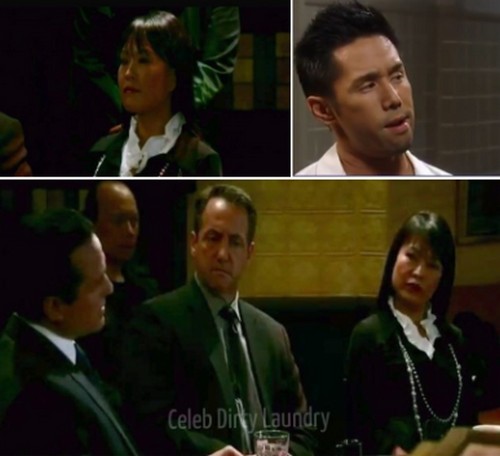 General Hospital spoilers explain that Brad is really the natural son of mob queen Ms Wu and that this shocking reveal helps explain his mystery GH marriage to Rosalie. Brad Cooper arrived in town as a lab tech at General Hospital in 2013. He cheated his way to the GH lab top working with best buddy Britta Westbourne (Kelly Theibaud). Britta promised him a promotion to lab manager if he switched paternity tests showing her baby (who was LuLu and Dante’s)was Patrick Drake’s (Jason Thomson) kid.

Brad’s character has been nothing short of raunchy and distasteful which makes me wonder what the pretty nice guy Dr Lucas Jones (Ryan Carnes) sees in him? In this case I guess opposites attract applies.
Brad has been a dubious scoundrel from the get go making fellow homosexual Felix Dubois (Marc Anthony) very uncomfortable with all of his sexual innuendo talk and passes. Felix being the polar opposite of Brad pushed him away countless times. While Brad was busy chasing Felix he was also busy blackmailing a very straight Michael Corinthos (Chad Duell) for sex and in exchange for silence about what he saw….

Brad caught Kiki (Kristen Alderson) and Michael kissing and at the time word was out that they were cousins. Brad knew Michael was raped in prison by a homosexual guy yet still put the pressure on him-nice guy right? Brad is proving himself to have the Wu bloodline with his devious antics.

Brad was adopted as an infant by a nice family, The Coopers, supposedly his bio mother died giving birth to him (we all know she most likely did not). It was revealed on January 24, 2014 that Brad is the bio son of Kim Wu (aka Kim Soong) (Steven Leigh), and great-grandson of Mr. Wu (Aki Aleong) of the Asian Quarter Mob family.

Just recently Sonny’s mob business has been targeted and someone, or some cabal, is trying to bring him down. Sonny called a “Meeting of the Families” and just recently we saw all five Mob families hashing it out. What was interesting was that The Wu family was there from the Asian Quarter – a ghetto district in Port Charles. The Wu family was being represented by Ms. Wu of the Triad. It is being said that the Asian lady at the table was in fact Brad Cooper’s biological mother who supposedly died giving birth to him.

Ms Wu would have most likely been dethroned from her mob power, or worse, by her traditionalist father and grandfather if an illegitimate child were ever discovered. Of course Ms Wu’s excuse when Brad one day finds out the truth will be she was protecting him from the violent mob life.

Of course Brad’s marriage of convenience to Rosalie tightens CDL’s belief that Brad is Ms Wu’s natural son. Note that CDL’s GH spoilers post explaining that Carlos Rivera may be alive and related to Rosalie through deadly mobster and Sonny blood enemy Hernando Rivera all of sudden makes this odd marriage make much more sense. A marriage to prevent authorities from forcing testimony from two children of Mob families, or even to seal a pact between their parents – well yes, entirely possible.

What do you think CDL’ers, do you think Brad’s real mother is the Wu family Mob princess we saw at the meeting of the 5? Please leave your thoughts and comments in the CDL comments below,