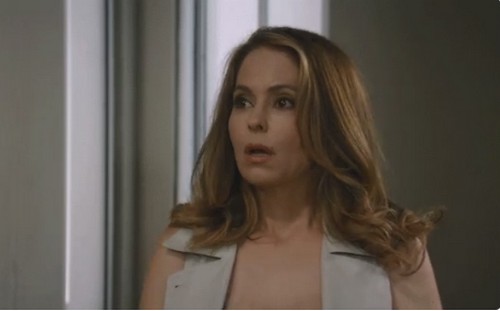 Here are some “General Hospital” spoilers for the Tuesday, August 18 episode of the hit ABC soap -forbidden love is in the air in Port Charles. Olivia Falconeri (Lisa LoCicero) comes to see her former forbidden lover Julian Jerome (William deVry). Olivia is ready to tell Julian that baby Leo is alive and well – now that she heard that Julian is out of the mob for good. But then something is going to happen that will stop her at the last minute – Olivia has reason to believe Julian is not being honest and decides to hold back on the truth. Olivia needs to talk to her other baby daddy Sonny Corinthos (Maurice Benard) for some advice.

In other forbidden GH love news, Lucas Jones (Ryan Carnes) is now less certain that Brad Cooper (Parry Shen) was in some sort of romantic marriage, but it seems like the marriage has deeper and more disturbing roots. Will Rosalie Martinez (Linda Elena Tovar) and Brad tell Lucas which of them committed the crime and which one could be called to testify? Lucas will calm down and he may be able to live with this for now – but can he face never being able to marry Brad?

Valerie Spencer (Brytni Sarpi) is trying to get past her forbidden love with Dante Falconeri (Dominic Zamprogna) and she walks in on a conversation between Maxie Jones (Kirsten Storms) and Carly Corinthos (Laura Wright). Carly tells Maxie it’s hard to be in love with a married man – Lord knows neither of them have clean hands when it comes to men. Maxie and Valerie will finally have some common ground to bond over, but is Maxie sincere?

Speaking of forbidden love, Lulu Spencer (Emme Rylan) is getting closer to indulging in some of it with her ex BF Dillon Quartermaine (Robert Palmer Watkins). Lulu and Spencer sit down together, ostensibly to talk about the movie project, but then they open up about their hopes and dreams for the future. When was the last time Lulu talked to Dante this intimately? Sharing like this won’t lead to anything good for Lulu’s marriage – or Dillon’s new relationship with Val.

Commissioner Jordan Ashford (Vinessa Antoine) wants to know from Dante if he thinks Julian is really back in the mob or if his hands are clean. Dante is very vested in wanting to know the answer to that question because the fate of his baby brother Leo rests in Julian’s hands. Dante and Jordan will consider the evidence and he can’t ignore what his dad Sonny is saying to Jordan, but thinks they have to look beyond that and consider the evidence and do some more investigating.

Sonny, meanwhile, chats up TJ Ashford (Tequan Richmond) and offers some advice about his mother Jordan. After all, Sonny lost his own mom prematurely and doesn’t want TJ to have similar regrets. Unfortunately, TJ is aggravated with his mom and still very loyal to Shawn Butler (Sean Blakemore) whom he blames his mother for sending away to prison. TJ will deepen his connection to Sonny soon when he goes to work spying for him and will deliver some helpful intel.

Don’t miss a moment of Tuesday’s show then come back to CDL for more “General Hospital” spoilers, gossip and news!