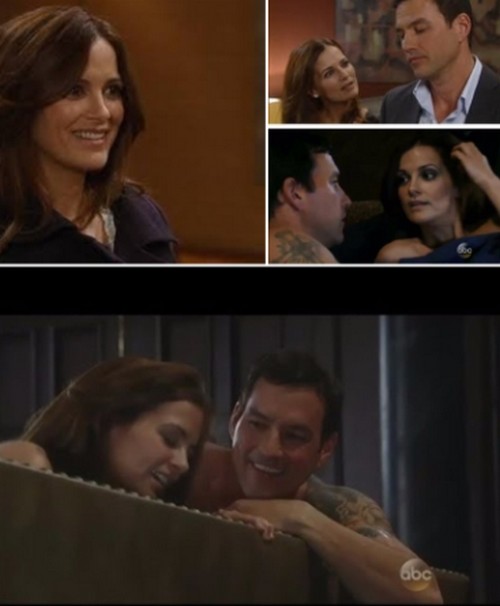 General Hospital spoilers examine the future of Hayden and Nik and show why they are destined to be the next GH super couple. What do you get when you have a female con artist nymphomaniac with a Russian Prince you get GH’s next new super couple Hayden Barnes (Rebecca Budig) and Nikolas Cassadine (Tyler Christopher).

Yes Nikolas tried to kill Hayden sending his henchman to put a bullet in her head and yes she blackmailed him for months but on GH these are the things great couples are made of. Nothing says I am really into you like a bullet to the brain or a little blackmail to keep it interesting – look at Luke (Tony Geary) and Laura (Genie Francis), General Hospital’s greatest couple of all time. Luke was created to be a monster that raped Laura yet the couple ended up getting married in 1981 with 30 million viewers tuning in. That episode is still the highest rated hour in soap history.

In March 2015 Hayden Barnes came to town sex crazed and offering herself up to almost every male she came in contact with, even her boss Ric Lansing (Rick Hearst). Lansing hired Hayden Barnes to come to PC to be the pretend wife of Jake Doe Lansing who was dating Elizabeth Webber at the time and saw Jake as a problem in his relationship with Liz.

Nikolas Cassadine (Tyler Christopher) took the bait because he thought Hayden worked for his wicked Grandmother Helena (Constance Towers) – he thought he was smarter than Hayden and wanted to get information about Grandmother but instead he got breakfast lunch and dinner in bed with dessert! Nikolas knew this girl was a con because he knew she was not Jake Doe’s wife since he knew Jake Doe was Jason Morgan – he knew Morgan was married to his cousin Sam (Kelly Monaco). Nikolas was basically playing with fire but obviously liked the burn.

Nik and Hayden spent 90% of their time in the bedroom which did not make for much of a great storyline during that time – the Hayden and Nikolas scenes had most viewers dreading them – of course this was the same time where we had to watch Sam and Patrick (Jason Thompson) in bed everyday and Maxie (Kirsten Storms) and Nathan (Ryan Pavey) in bed everyday so maybe it was just a huge month of shagging overkill – but the Hayden/Nik Storyline picked up once she got out of the dreary bedroom and into formal wear – first stop The Annual Nurses Ball. 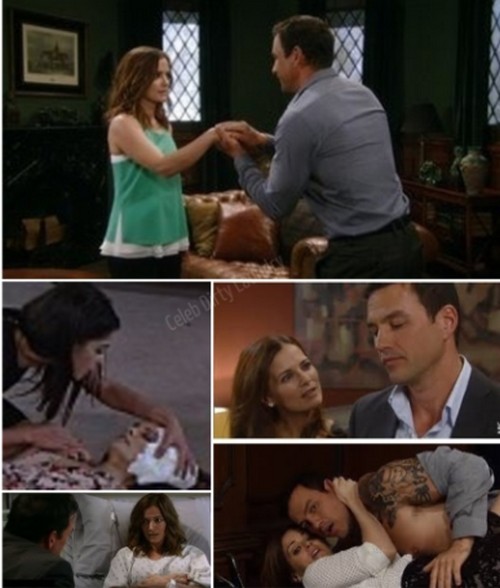 Hayden and Nik went to the Annual Nurses Ball together and a chain of events affected many characters starting with the epic Carly (Laura Wright) smack down on Hayden – exposing her for the con artist that she was. This smack down caused the domino effect also exposing Ric for the deviant behind the big scam – leaving Ric and Hayden out in the cold. Liz dumped Ric and in the process went to Nikolas to tell him she loved Jake Doe and that she and Ric were through!

This was the explosive scene where Nik told Liz that Jake was Jason and also the moment where Hayden gained all of the power she ever wanted over Nikolas. This scene was kind of ridiculous considering Nik does not look out for anyone but himself these days and certainly does not care if Liz has fallen for Jake/Jason – but out of character he reveals to Liz who Jake is because he cares about her and doesn’t want her hurt when the truth comes out that her man is Jason. The writers pulled the wool over our eyes on that one because we were so desperate for Liz to know the truth and tell Jake he is Jason that our all common sense went out the window and we swallowed this ridiculous storyline hook line and sinker.

This has gone on for so long now that most viewers forgot why Nik felt the need to spill his guts to Liz and yet he is a steel trap with every other person in PC, especially his cousin Sam. During all of this truth telling con Hayden is eavesdropping and sees her lonely desolate days are over – cha ching!

Soon after overhearing this revelation about Jason, Hayden worms her way into Wyndemere and into Nikolas’s bed – Nik comes home to find Goldilocks Hayden in his bed – he orders her out but Hayden was holding all of the cards and she made sure Nik knew it. Like watching a tennis match the blackmailing bounces from court to court – now the ball is in Hayden’s court and she is getting a pretty good deal out of it a room in a castle and all of the free cardiovascular work she can get with a Prince -not bad.

These two characters have a lot of potential because Hayden will keep Nik on his toes – actually Britta Westbourne (Kelly Theibaud) would have too but for some reason TPTB made Nik very judgemental of Britt, eventually writing her off of the show.

Months ago a fight ensued at Wyndemere with Elizabeth hurling accusations at Hayden calling her a two-bit con, Hayden got pissed and told Nik Jake had a right to know who he is and that she was going to tell him! Nikolas had one of his cronies follow her to the garage Jake worked at and as Hayden got Jake’s attention and started to tell him the big reveal she was shot in the head – eventually going into a coma. This was how they wrote off another fan favorite Shawn Butler (Sean Blackmore), Sonny’s right hand man. The attempted murder was pinned on Shawn and case closed.

Hayden recently awoke from her coma and lucky for Nik and Liz she has amnesia – actually lucky for Hayden too! Hayden has no idea her Prince tried to have her killed and because Hayden has no memory so she is safe for now.

Nikolas asks Hayden back to Wyndemere to keep an eye on her but we all know where this kind of story leads. Nik will develop genuine feelings for the new and improved Hayden and Hayden will fall for the Prince, not knowing he is really a frog who tried to have her killed, but they will have a fairytale relationship until she starts remembering. Rumor has it that Hayden does start remembering but keeps it to herself for awhile.

In the end Hayden will be the reason Nikolas gets off on attempted murder charges – it is kind of like a Luke and Laura scenario – Hayden will love Nik and so forgive and protect him. We will see lots of Hayden and Nikolas in the next few months and it will be a positive.

Will Hayden bring out the best in the good Prince gone bad? CDL says yes and they will end up being a GH fan favorite couple. Hayden Barnes is here to stay (Rebecca reportedly signed a 4 year contract) and will have lots of storyline – let’s hope the new writers give Hayden and Nikolas lots of adventures and not just in the bedroom!

What do you think CDL’ers do you like Hayden and Nikolas as couple or is there too much water under the bridge? Please leave your thoughts and comments in the CDL comments below.