General Hospital (GH) Spoilers: Morgan Shoots Loved One – Who’s The Victim – Will Morgan End Up in Pentonville or Shadybrook? 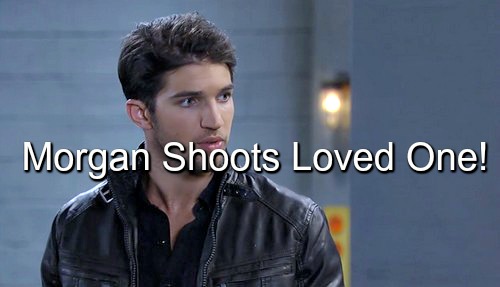 “General Hospital” (GH) spoilers reveal that Morgan Corinthos (Bryan Craig) is far from sane and when he quits his meds and buys a gun in coming days, all hell will break loose. There is a perfect storm of scary events heading for a collision and Morgan is in the middle of it and will take a dangerous turn.

We all know that Morgan aspires to be his dad Sonny Corinthos (Maurice Benard) even though Sonny doesn’t want him near the mob biz. And now that Morgan has figured out his love life is flat while he’s taking his meds, he’ll skip doses and may go off the bipolar meds completely.

And if that wasn’t bad enough, Morgan decides to play mob games and goes and gets himself a gun. All of this happens while the mob war is heating up from both sides. Raj is bringing in more guns and Paul Hornsby (Richard Burgi) is scared Anna Devane (Finola Hughes) is onto him.

Paul is considering setting up Ava Jerome (Maura West) to take the fall for him while Sonny is completely unaware that Paul is in the game at all. Ava is planning to get out of the business and may be scheming to set Paul up.

Plus Sonny is plotting to take down Ava in coming days. Whew. That’s a lot of mob plotting and everyone seems to have less than perfect information about the players. That spells trouble. GH spoilers indicate February sweeps will feature a gun battle on the pier that results in bloodshed.

That’s where Morgan comes in – he’s working at Corinthos Coffee down on the pier and now he’s got a gun, a bipolar manic episode going on, and no clue just how dangerous that makes him. GH spoilers indicate that Morgan will get involved in the shootout with disastrous results.

Some GH spoilers have teased that Lulu Spencer (Emme Rylan) will be the one Morgan shoots but let’s face it, he could shoot more than one person – and it could be anyone down on the docks. But with Lulu’s boat The Haunted Star being anchored at the waterfront, she is a potential victim.

But if Lulu is the one shot, don’t look for a death – shootouts like this usually only kill ancillary extras we know little about. Another possible victim is Sonny – and that would be a shame since he’s just getting back on his feet after the last shooting…

Also down at the docks will be Ava, Raj, Max Giambetti (Derk Cheetwood) and others. We’ll have to wait and see who Morgan shoots, but the next question is, given his shaky mental condition, will Morgan face a stint in Pentonville or Shadybrook?

If he shoots to kill, it may be Pentonville. But since Sonny has good lawyers, let’s cross our fingers he’ll get a time-out at Shadybrook instead. GH spoilers also reveal that the shootout and Morgan’s involvement will have Carly questioning the dangers of Sonny’s cartel lifestyle.

And we know Carly and Sonny will soon face a hard choice about Morgan. Will they commit him to Shadybrook against his will? Morgan will not like that at all. What do you think GH fans? Who will Morgan shoot? And will he end up in the sanitorium as a result?