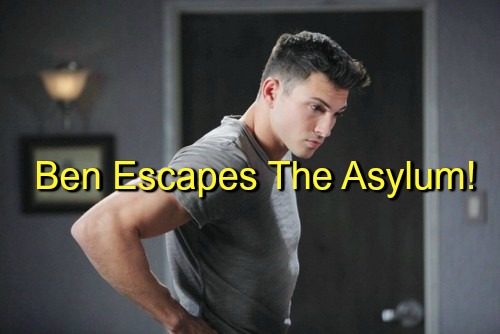 “Days of Our Lives” spoilers reveal that Ben (Robert Scott Wilson) will be back to wreak more havoc. We’ve been hearing about this return for a while now, but no one was really sure how it would play out. Many DOOL fans suspected it could even be part of a dream sequence. However, it appears we’re going to get crazy Ben in the flesh.

“Days” spoilers indicate that Chad (Billy Flynn) will be rattled when he gets some shocking news. He’ll find out that Ben has escaped from the psychiatric hospital he was being held in. When we last saw Ben, he had completely gone off the deep end. Abigail (Kate Mansi) tried to get him to reveal her son’s location, but Ben just fondly described memories of making peanut butter and jelly sandwiches as a kid.

In other words, Ben didn’t seem to be much of a threat anymore. Still, the timing of Ben’s apparent breakdown is somewhat suspicious. Can we be certain Ben is that far gone? Ben had lost all control by the time he left Chad and Abigail to burn in that cabin, but he knew exactly what he was doing. He obviously wanted them to suffer together.

When Lani (Sal Stowers) and JJ (Casey Moss) showed up to arrest Ben, he was suddenly incapable of carrying on a coherent conversation. He inexplicably reverted to childhood. Could Ben have been faking to score an easier punishment? Maybe Ben simply knew the jig was up and wanted to avoid doing time in a maximum-security prison.

Of course, life locked up in a psychiatric hospital may not be what Ben had in mind either. Perhaps that’s why Ben will take advantage of his opportunity to make a run for it. It’s also possible that Ben truly had that breakdown, but he’s managed to resume his menacing mentality.

Whatever the case, “Days of Our Lives” spoilers say Chad will be disturbed when he gets updates on Ben’s escape. Naturally, Chad will be worried about Thomas and Abigail’s safety. Ben put Abigail through the most horrific ordeal of her life and he’s probably not done yet.

After all, we now know that Chad is the biological father of Abigail’s baby. That’s not going to sit well with good ol’ Benny (if he even believes it). Will Ben try to take Thomas (aka Colin) away from Abigail? Will he attempt to kidnap or kill Abby and Chad again? Will one of them turn the tables and kill Ben instead?

There’s just so much potential with this storyline. DOOL viewers will be excited to see what’s in store. Stick with “Days of Our Lives” to watch Ben stir up trouble.

So “Days” fans, what do you think about Ben’s upcoming return? Are you looking forward to the chaos? Voice your opinion in the comments below and don’t forget to check CDL often for the latest “Days of Our Lives” spoilers, updates and news.