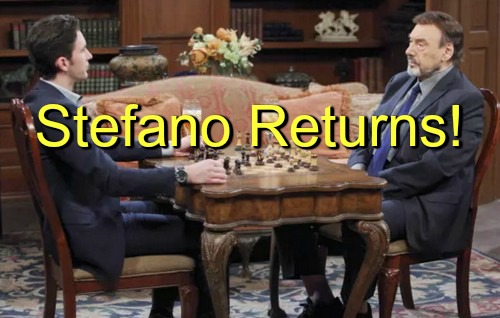 “Days of Our Lives” spoilers tease that we haven’t seen the last of Stefano DiMera (Joseph Mascolo). “The Phoenix” may be gone, but he’s not forgotten. Chad (Billy Flynn) will have trouble coping with the loss of his father. It looks like Stefano will sense his son’s pain and he’ll return in a vision for a deep chat.

DOOL spoilers indicate that Chad will be stunned when Stefano suddenly appears before his very eyes. He’ll quickly realize that Stefano DiMera returns in the form of an apparition. Stefano will provide a bit of comfort to Chad as he deals with his grief. Chad will open up to Stefano about how he loves and misses him. Stefano will likely let Chad know he feels the same way.

There’s a good chance Stefano will also urge Chad to stop being so cold to his brother. Andre (Thaao Penghlis) definitely isn’t a stand-up guy, but he’s family. Chad has had enough of all the “la famiglia” talk, especially since Andre used that phrase to brainwash him. Still, a little piece of Chad may want to honor Stefano’s wishes.

“Days of Our Lives” spoilers suggest that tough times lie ahead for Chad. In various interviews, Billy Flynn has pointed out that heartbreak is in Chad’s future. Since Abigail (Kate Mansi) will presumably be written out until DOOL brings in a recast, it seems Chad will be losing his love for a while. Mansi’s last air date should be around May or June.

Chad has always been a conflicted DiMera. He feels like his name is a black mark on his record. “Days” fans know that Chad typically tries to rise above the evil sins associated with his family. Nevertheless, the impending doom could have Chad turning to the dark side if he’s not careful.

Let’s hope that Chad will be able to keep his head on straight in the coming months. Many DOOL viewers like the fact that Chad usually attempts to do the right thing. In the meantime, we can enjoy Stefano’s visit and listen to all his words of wisdom. Stick with “Days of Our Lives” for updates on Chad and Stefano’s heartfelt reunion.

So “Days” fans, what do you think about the news that Stefano will show up in a vision? Will Chad appreciate the opportunity to see his father again? What will Stefano say and how will it affect Chad’s actions moving forward? Voice your opinion in the comments below and don’t forget to check CDL often for the latest “Days of Our Lives” spoilers, updates and news.