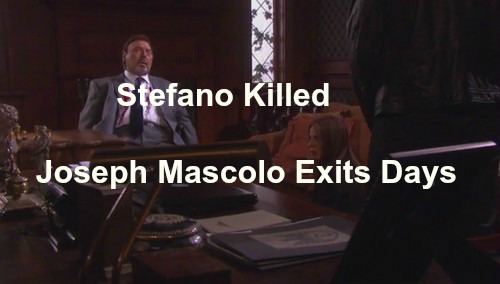 “Days of Our Lives” spoilers reveal that the great Stefano DiMera (Joseph Mascolo) may have taken his last breath on the NBC soap. DOOL fans know that Stefano has been killed off plenty of times, but this death might be his swan song. It’s a tough loss, but at least Stefano went out with a bang!

There have been several reports that Joseph Mascolo’s health has been declining recently. In an issue of National Enquirer, an inside source offered a few details on what led to Mascolo’s firing. The show insider claimed that the 86-year-old actor had been dealing with Alzheimer’s disease for over a year before he suffered a crippling stroke last March.

If this report is true, it would undoubtedly be difficult for Mascolo to keep up the hectic pace at “Days of Our Lives.”

The source noted that Mascolo began to have difficulty remembering lines as a result of his condition. Mascolo has been wheelchair bound for a while now as well. “Days” tried to work around it by writing in a heart attack for Stefano. However, it appears the producers were becoming increasingly concerned for Mascolo’s health. “It’s so tragic to be witness to his steady decline,” said the insider.

Nevertheless, Mascolo gave a fantastic performance in his exit storyline. The ripple effect of Stefano’s murder should last for many months. It looks like Andre (Thaao Penghlis) will carry on the family legacy. Andre hasn’t quite achieved the elite villainous status that Stefano has, but he’s working on it. If Stefano had to bite the dust, Andre is the perfect person to continue his evil ways.

Most DOOL viewers will miss Stefano and his devious schemes, but we might have a glimmer of hope. There’s been some buzz about the possibility of Stefano showing up as apparition on occasion. After all, Andre may need a little guidance as he takes over the DiMera dynasty.

Of course, there’s also a chance we could see Hope (Kristian Alfonso) haunted by Stefano’s ghost. You don’t fire three bullets into Stefano without consequences! Whether Stefano makes a brief return or not, Mascolo has made a name for himself as daytime royalty.

Stefano is an iconic character in soap opera history and he’ll certainly be missed at “Days of Our Lives.” We’ll give you updates if we hear any additional info on Mascolo’s departure. Stick with DOOL to see the aftermath of Stefano’s death.

So “Days” fans, what do you think about the news that Joseph Mascolo’s health issues reportedly led to his firing? Do you feel Stefano got a fitting exit if that was truly his last hurrah? Would you like to see Stefano come back as a ghost occasionally? Voice your opinion in the comments below and don’t forget to check CDL often for the latest “Days of Our Lives” spoilers, updates and news.

Editor’s Note: CDL accurately posted about Stefano being killed and leaving the show 2 months ago – if you want to know what is happening on Days, and what is going to happen, stick to CDL!