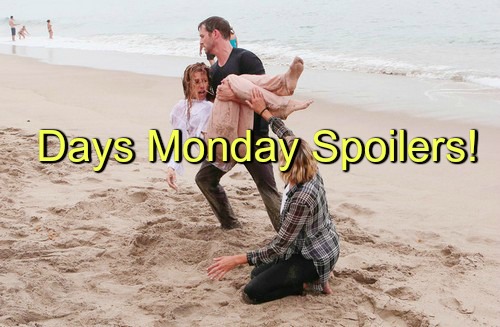 “Days of Our Lives” spoilers for Monday, February 22, reveal that Ava (Tamara Braun) will begin to taunt Kayla (Mary Beth Evans). Ava sent the sex video to Kayla’s phone and it caused a major confrontation with Steve (Stephen Nichols).

He tried to explain, but Kayla is still feeling hurt. Now Kayla will be ready to rip into Ava with everything she’s got.

Ava’s demeanor certainly won’t help the situation. It will only make Kayla more enraged. DOOL spoilers indicate that Ava will continue to poke the bear. Kayla will finally decide she’s had enough. She’ll physically attack Ava in the midst of their quarrel.

Of course, this is exactly what Ava wants. She’s hoping to push Kayla’s buttons and use her reaction against her. Stay tuned to see Ava take it to the next level later this week.

Elsewhere, Steve will get a stern lecture from his son. Joey (James Lastovic) is already angry at Steve for making out with Ava. “Days of Our Lives” spoilers tease that Joey will fly off the handle when he learns Steve and Ava slept together. Steve will do his best to calm Joey down, but it’s doubtful that his explanation will appease him. Joey is pretty stubborn and he’ll find it difficult to accept Steve’s excuses.

Meanwhile, “Days” spoilers say Brady (Eric Martolf) will dive in the ocean as he attempts to save Summer (Marie Wilson). Brady was stunned when he spotted Summer on the beach, but he was downright shocked when she walked straight into the waves. Brady will have to think fast if he hopes to prevent a tragedy.

DOOL viewers know that Summer is quite unstable. It appears Summer is trying to commit suicide. Brady will get a chance to display some of Daniel’s (Shawn Christian) heroic tendencies.

He’s putting that heart to good use! Brady will pull Summer to safety and try to get some answers out of her. Stick with “Days of Our Lives” for updates on what Brady will learn.

So “Days” fans, what do you think about the news that Ava will provoke an attack from Kayla? Will Kayla regret her outburst later on? Can Steve find a way to make peace with Joey? Will Summer be grateful that Brady saved her from making a huge mistake?