Days of Our Lives (DOOL) Spoilers: Chad and Ciara Grow Closer – Disturbing or Intriguing – Vote on This New Couple

BY Heather Hughes on May 24, 2016 | Comments: 4 comments
Related : Days of Our Lives, Soap Opera, Spoiler, Television 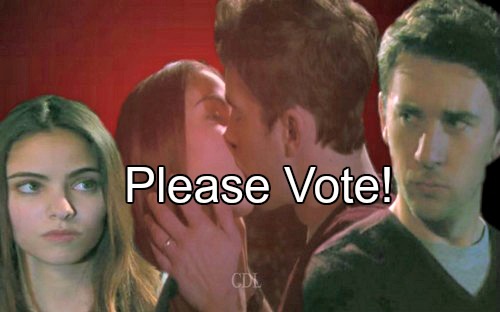 “Days of Our Lives” (DOOL) spoilers tease that Ciara (Vivian Jovanni) will continue to gravitate toward Chad (Billy Flynn). Ciara has been through so much over the last few months and she’s really struggling to move on with her life. Aiden’s (Daniel Cosgrove) return has made things even more complicated.

Likewise, Chad is feeling overwhelmed by Abigail’s (Kate Mansi) situation. He just wants Abby to get better so they can resume their normal life (at least as normal as it can get in Salem). Unfortunately, Abigail won’t even agree to see Chad right now.

Ciara and Chad are kindred spirits in the midst of the chaos. They’re both feeling lost and alone. With that in mind, DOOL seems to be setting up something between Chad and Ciara. “Days” fans watched as Ciara had a steamy dream about Chad. They ended up sharing a kiss before Ciara woke up.

It’s clear that Chad and Ciara are bonding, but Days of Our Lives spoilers ask how far will it go? Many “Days of Our Lives” viewers have been expressing outrage over the direction of this storyline on social media. If Chad hooks up with Ciara, it could definitely be considered inappropriate.

First of all, Ciara was recently raped and she’s just finishing up high school. That would make Chad’s interest in Ciara super creepy if it happens. Plus, Theo (Kyler Pettis) has been nothing but a loyal, caring boyfriend to Ciara. He’d do anything for her and she knows it. Will Ciara dump Theo as this crush develops?

We have to cover this from Chad’s angle, too. While Abigail was with Ben (Robert Scott Wilson), Chad insisted that he’d always fight for her. Abby is the love of Chad’s life and DOOL has made sure to remind us of that repeatedly. Are we honestly supposed to believe that Chad would give up on his wife now? Abigail has only been at the psychiatric hospital for a month. Give Abby time to get help!

The Chad we know and love wouldn’t abandon Abigail, especially not when she’s battling a mental illness. Some “Days of Our Lives” watchers fear that the show is trying to turn Chad into a slightly more “DiMera-ish” character like EJ (James Scott). When one fan tweeted that Chad and EJ aren’t the same, Billy Flynn replied that “they never will be.”

Flynn’s response is giving viewers hope that this thing between Chad and Ciara won’t result in a real romance or even an “EJabby” type of fling. Still, even a one-sided crush could cause a whole lot of trouble. The mere thought of it is shaking up the soap world.

Of course, there are probably some “Days” fans out there who are OK with Ciara and Chad as a pairing. As we mentioned, there are good reasons why they would be able to relate to each other. Maybe you just want to see how the updates to their relationship play out.

Regardless, we want to know your opinion on this duo. Could you ever get behind Chad and Ciara as a couple? Is this direction bad news or are you interested in seeing where this leads? Vote in our DOOL poll and don’t forget to check CDL often for the latest “Days of Our Lives” spoilers, updates and news.