BY Heather Hughes on May 12, 2016 | Comments: one comment
Related : Days of Our Lives, Soap Opera, Spoiler, Television 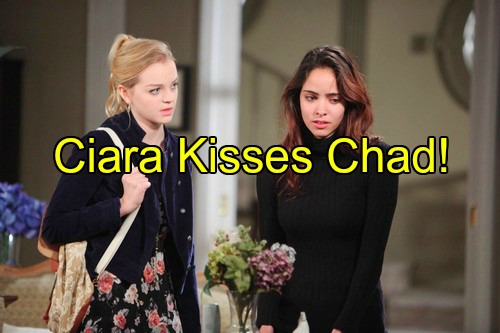 “Days of Our Lives” spoilers tease that Chad (Billy Flynn) will be feeling pretty down in the dumps after his recent visit with Abigail (Kate Mansi). Abby flipped out when Chad announced that Jennifer (Melissa Reeves) was on her way over. She thought it was bad enough that Chad brought Thomas.

Abigail feels like she’s getting worse and she’s just not up to seeing anyone in this state.

Dr. Robinson (Anne-Marie Johnson) thinks it’s best to relieve the pressure by keeping any family members away, but that’s going to tear Chad apart. Abigail may be the one in the mental institution, but Chad also has a battle on his hands. He’s feeling helpless and alone as a single father.

The good news is that Chad will have some help. The bad news is that it could spell trouble. DOOL spoilers say Ciara (Vivian Jovanni) will try to cheer Chad up at the mansion. Ciara is already serving as a nanny, but it looks like she wants to take care of Chad as well.

They’re establishing a nice bond, but it seems Ciara may go overboard on that idea.

“Days of Our Lives” spoilers indicate that Ciara will have a romantic dream about Chad. It will undoubtedly catch her off guard. In this dream, Chad and Ciara will share a steamy kiss. “Days” fans know that Theo (Kyler Pettis) is head over heels for Ciara and she’s starting to fall for him, too.

Will Ciara find herself tempted by the allure of Chad’s good looks and maturity? A dream is just a dream, but Ciara might try to act on those feelings at some point. Many DOOL viewers are hopeful that Chad will remain faithful to Abigail in the midst of all this.

Chad is a new dad and the love of his life is in a psychiatric hospital. Ciara is a teen who was just raped for crying out loud. If anything happens between them, it would be unbelievably inappropriate. There’s still a chance that this will be a one-sided crush.

Perhaps we’ll simply see a platonic connection for these two. Maybe that way Chad won’t be so hard on Hope (Kristian Alfonso) when he inevitably gets confirmation that she killed Stefano (Joseph Mascolo). Besides, “Days of Our Lives” buzz hints that Rafe (Galen Gering) could be the one who ends up taking the fall.

Stick with the NBC soap for updates on what’s in store.

So “Days” fans, what do you think about Ciara’s romantic dream about Chad? Will Ciara try to turn this dream into a reality? Will Chad stay loyal to Abigail as she deals with her problems? Voice your opinion in the comments below and don’t forget to check CDL often for the latest “Days of Our Lives” spoilers, updates and news.