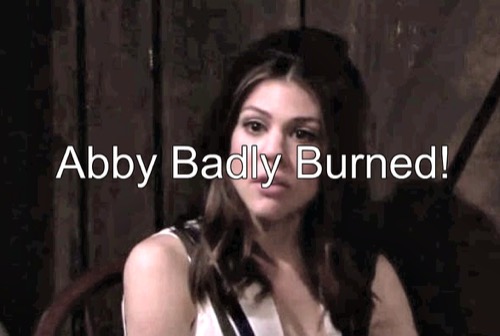 “Days of Our Lives” (DOOL) spoilers for the next couple of weeks’ episodes tease that Chad (Billy Flynn) will knock back a few more drinks as he tries to cope with his heartache. It’s killing Chad to be apart from Abigail (Kate Mansi). She’s the love of his life, but she continues to push him away.

Chad won’t know how he can go on like this.

Ciara (Vivian Jovanni) will jump at the chance to take care of Chad in his time of need. She feels drawn to Chad’s maturity and his unpredictable nature. DOOL viewers saw Ciara kiss Chad in a dream. After that, we all guessed what was coming.

Chad and Ciara could easily end up sharing a kiss in reality. By next week, Chad will give Ciara an apology for how he acted. He’ll assure Ciara that the alcohol was to blame. Of course, Ciara will likely read way too much into all of this. She probably thinks she’s found her soul mate.

Ciara needs to keep those raging teen hormones in check.

However, something’s about to happen that will send Chad’s world crashing down. “Days of Our Lives” spoilers say a fire will break out at the mental institution. Marlena (Deidre Hall) will accompany Chad to the facility for updates on Abigail’s condition.

There was a spoiler from a while back that still hasn’t materialized on screen. It indicated that Abigail would accidentally hurt herself. Could Abby hallucinate a Ben (Robert Scott Wilson) appearance? She might grab some matches and attempt to finish what she started.

Regardless, Abigail will be injured in the blaze, badly burned in fact. Will she need plastic/reconstructive surgery to repair the burn damage? “Days” spoilers reveal that Chad will try to support Abby, but she won’t make it easy. Abigail will be in severe distress and she won’t know how to handle it. She’ll think she’s beyond help at this point.

DOOL spoilers state that Kate Mansi will exit the role of Abigail on June 24. We also know that Abby will go missing. It seems Abigail will escape or be kidnapped from the institution – will she be wearing bandages from plastic surgery?

It would be the perfect opportunity for someone like Clyde’s (James Read) minion to swoop in and capture Abby. We’re just throwing that out there. Andre (Thaao Penghlis) should be out of jail by then, too. There are definitely some good options for Abigail’s potential captors,

Chad will do everything he can to find Abigail, but his determination could quickly turn to despair. Marci Miller will debut as Abigail this fall, and perhaps her new face will be explained by the fire injuries and subsequent reconstructive surgery – but Chad may lose hope in the meantime.

Stick with “Days of Our Lives” to watch Chad’s lengthy struggle.

So “Days” fans, what do you think about the news that Chad and Ciara will share some close moments? Will Chad shift his focus back to Abigail after she’s injured in the fire? Who might kidnap Abigail? Will Clyde get revenge for Ben?