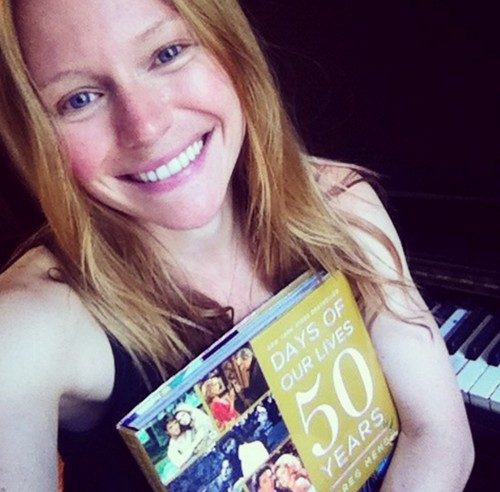 “Days of Our Lives” spoilers reveal that Marci Miller will be taking over the role of Abigail this fall. Many DOOL viewers have been impressed with Kate Mansi’s portrayal of Abby, so there are obviously some worries about the transition. In a recent Instagram post, Miller expressed both enthusiasm and fear over what lies ahead.

Miller said, “So grateful for your LOVE and PATIENCE as I take this very big, very scary and very exciting step!” She also praised Mansi for providing a “beautiful foundation that any actor in their right mind would be equally thrilled and terrified to step into!” Miller noted that she was rooting for Mansi as her time in Salem winds down and she’s happy to be part of DOOL’s family.

It sounds like Miller realizes this is a tricky situation. Whenever “Days” brings in a recast, there’s an adjustment period. However, it’s even harder when they’re trying to replace a beloved star like Mansi. She’s had an incredible journey during her stint at “Days of Our Lives.”

After Abigail’s affair with EJ (James Scott), there was a noticeable shift in the character. The changes really showcased Mansi’s talent. She was given a dynamic, front-burner pairing with Billy Flynn (Chad). “Chabby” quickly became one of DOOL’s hottest couples.

Abigail faced gripping drama through her battles with Ben (Robert Scott Wilson) as well as her mind. Mansi had the opportunity to truly shine and we’re all hoping that Miller will get that chance, too. It’s clear that Miller is eager for fans to see her spin on the character, but she knows what she’s getting herself into. It seems Miller is up for the challenge.

We’ll all be looking forward to Miller’s introduction this autumn. Chad is currently stalled in an unpopular storyline with Ciara (Vivian Jovanni), so Abigail can’t come home soon enough. Abby is Chad’s true love and there’s just no way around it. Stick with “Days of Our Lives” for updates on the inevitable “Chabby” reunion.

So “Days” fans, what do you think about Marci Miller’s comments regarding her newest gig? Are you optimistic about this recast news? Are you glad Miller understands the excitement and trepidation about taking over as Abby? Voice your opinion in the comments below and don’t forget to check CDL often for the latest “Days of Our Lives” spoilers, updates and news.

So grateful for your LOVE and PATIENCE as I take this very big, very scary, and very exciting step! @katemansi has laid a beautiful foundation that any actor in their right mind would be equally thrilled and terrified to step into! Rooting for her ALL THE WAY as she winds down in these next few weeks on #DOOL . Truly a joy to get to be a part of this family. Much love. Xx