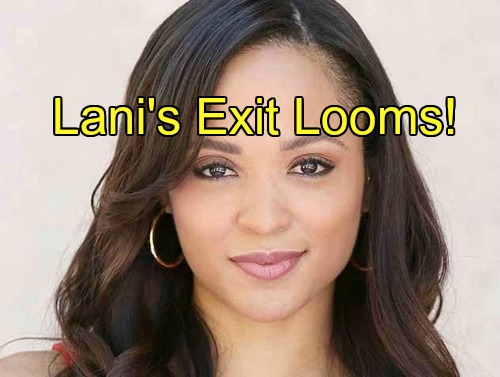 “Days of Our Lives” (DOOL) spoilers tease that Shawn (Brandon Beemer) and Belle (Martha Madison) will find themselves in a tricky situation. Belle is a defense lawyer and Shawn is employed by the Salem Police Department. They inevitably end up working against each other from time to time.

However, it looks like they’ll remain remarkably calm during their next faceoff.

In the past, Shawn and Belle would’ve let the animosity carry over into their relationship. They’ve been a state of constant turmoil over the last few months. Thankfully, Belle and Shawn are in a much better place now. They’re finally getting along as they focus on their future.

DOOL spoilers reveal that Shawn and Belle will even share a heartfelt moment during their work dispute. They’ll prove that they can disagree without being at each other’s throats. It’s a nice change of pace for these two.

Lani (Sal Stowers) won’t be too happy about the scene that’s unfolding in front of her. Shawn probably should’ve tried to dial down his attraction to Belle around Lani. Instead, he’ll be flaunting his reunion right in Lani’s face.

Lani might try to hide her displeasure, but it’s obvious when she’s miffed.

“Days” spoilers suggest that Lani’s exit is drawing near. We haven’t heard any news about an exact departure date yet, but it has to be coming up pretty soon. Summer (Marie Wilson) should be in the closing stages of her storyline around the end of this month.

Since Sal Stowers was given the boot around the same time, she may not have too many episodes left.

When Lani debuted, she had some potential. As Abe’s (James Reynolds) long-lost daughter, Lani had a solid Salem connection to build on. There was more to explore between Lani and her brother, Theo (Kyler Pettis), as well.

On the bright side, there won’t be any great hole in the show thanks to Lani’s exit. It’s tough to say if they’ll even give her a real goodbye. “Days of Our Lives” might choose to do something similar to Eve’s (Kassie DePaiva) departure. There was no big sendoff. Instead, Eve just sort of faded away. Lani could easily follow suit.

Of course, there’s always a chance that Lani will get fed up with her failing love life and decide to hit the road. Lani might choose to transfer somewhere in hopes of forgetting Shawn, Rafe (Galen Gering) and anyone else who left her feeling jilted.

Stick with “Days of Our Lives” updates on Lani’s final air date.

So “Days” fans, what do you think about Shawn and Belle’s reconnection? Should they be parading it in front of Lani? How will Lani leave the NBC soap? Will they just pretend she isn’t around or will there be a decent explanation?