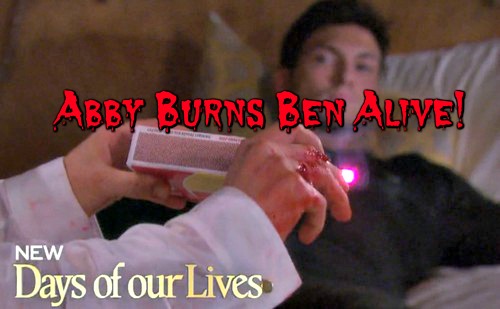 “Days of Our Lives’ spoilers reveal that Abigail (Kate Mansi) will face off with Ben (Robert Scott Wilson) in a dangerous encounter on next week’s episodes. After gaining the upper hand, Abigail will be given a chance to get the ultimate revenge. Abby will stab Ben and tie him to the bed. Then, she’ll heat things up a bit.

DOOL spoilers indicate that Abigail will decide that Ben deserves to suffer just like she did. She’ll douse the mattress in gasoline and strike a match. Ben will think Abigail wouldn’t dare. Oh yes, she would! Abigail will indeed set the blaze and the flames will quickly engulf a helpless Ben.

It looks like Ben will either break free or someone will show up to pull off a dramatic rescue. It’s tough to believe Chad (Billy Flynn) wouldn’t leave Ben to burn, but he’s still an option to consider. Perhaps rookie cop JJ (Casey Moss) could come by and lug Ben out. He might feel the need to honor his commitment to protect and serve. 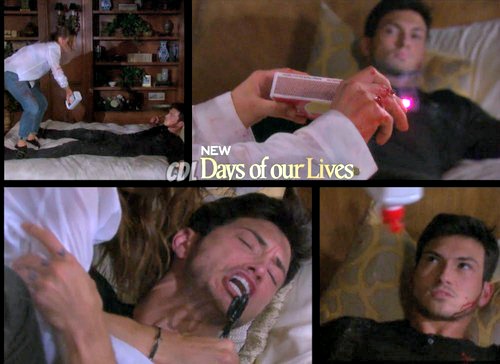 However, it could be something as simple as the fire department being called to investigate the smoke. Whatever the case, Ben will make it out alive. “Days of Our Lives” spoilers say a very charred Ben will be taken to the hospital for treatment. His burned body will be covered in bandages.

It seems Ben’s fate is uncertain. Maybe this is a way of dragging the story out until Kate Mansi’s last “Days” air date, which is expected to be in late May or early June. How will Abigail feel about her failure to get the job done? She’ll probably be disappointed that Ben didn’t succumb to the scorching.

Days of Our Lives spoilers will have to figure out where this leaves Abigail. Could she face charges of some sort? After all, stabbing and restraining Ben could be considered self-defense. Setting Ben on fire won’t exactly fall under that category.

Then again, Roman (Josh Taylor) has looked the other way when it comes to almost everyone else’s crimes. When you think about what Abigail has been through, Roman might be willing to do the same for her. Nevertheless, Abigail’s loved ones may realize she needs help to cope with all the trauma she’s endured.

In fact, Abigail may continue to unravel since Ben’s still alive. DOOL viewers will be anxious to see how the next couple of months will play out. Stick with “Days of Our Lives” for updates on Abigail’s upcoming departure.

So “Days” fans, what do you think about the news that Ben will survive the fire Abigail sets? Can Ben ever really be stopped? Will Abigail face consequences for her actions or will more distress be her only punishment?