BY Heather Hughes on May 22, 2016 | Comments: 3 comments
Related : Days of Our Lives, Soap Opera, Spoiler, Television 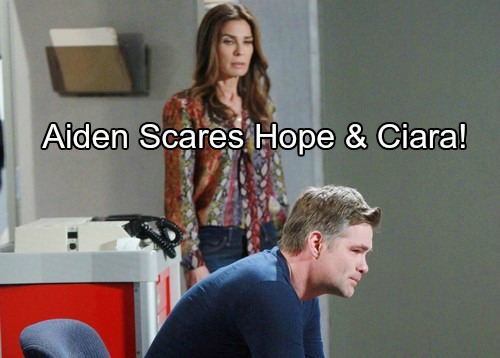 “Days of Our Lives” (DOOL) spoilers tease that Aiden (Daniel Cosgrove) will face another obstacle in his quest to reunite with Hope (Kristian Alfonso) on this week’s episodes. DOOL viewers know that Aiden has been trying to prove his love. He’s willing to do anything for a second chance.

Hope has been pondering her feelings for Aiden and she’s definitely torn about what to do. Aiden has made a lot of mistakes and Hope is hesitant to trust him again. The fact that Hope has fallen for Rafe (Galen Gering) makes all of this extra confusing. Still, Hope could open her heart to Aiden just a crack.

Unfortunately, Aiden’s next move could blow his opportunity. “Days of Our Lives” spoilers indicate that Aiden will decide he wants to secure Chase’s (Jonathon McClendon) release. He’ll stop by the jail to give Chase updates on the plan.

First of all, Chase will be floored by the news that Aiden is alive. He thought his father faced a horrible, disgraceful death. Aiden’s “demise” put Chase on a tumultuous path and the consequences were devastating.

Before Aiden was captured, Chase was a sweet kid who loved his family. In just a few months, Chase turned into someone who was willing to rape his stepsister. “Days” spoilers reveal that we’ll see some emotional moments for Aiden and Chase. Aiden will undoubtedly feel guilty that he wasn’t there to guide his son. Likewise, Chase will apologize for letting his dad down.

Once they’ve talked through everything, Aiden will vow to help Chase gain his freedom. To Aiden’s surprise, Chase will declare that he doesn’t want it. He’ll insist that he did the crime and now he’s going to do the time. Chase regrets what he did to Ciara (Vivian Jovanni), but that doesn’t excuse his actions.

Nevertheless, Aiden won’t give up on Chase. He’ll feel obligated to help Chase in any way he can. Of course, that will make things incredibly awkward with Hope. DOOL spoilers say Hope will beg Aiden to reconsider. She’ll realize this could turn Ciara’s world upside down.

If Aiden goes through with his plan, will Hope ever forgive him? Their relationship is about to get even more complicated. Stick with “Days of Our Lives” to see the chaos ahead.

So “Days” fans, what do you think about Aiden’s emotional reunion with Chase? Will they be able to reconnect? What about Aiden’s strategy to secure Chase’s freedom? Will that cause a rift with Hope?