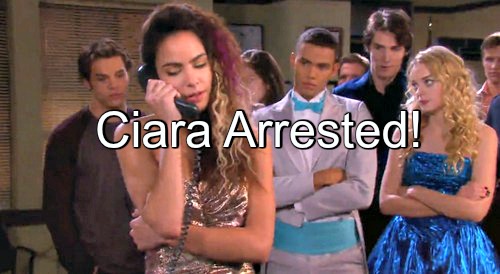 “Days of Our Lives” (DOOL) spoilers for this week’s episodes from Tuesday, April 26, to Friday, April 29, tease that some shocking moments are on the way. A large portion of this week will be devoted to DOOL’s teens. Fortunately, we’ve got several likable characters and a wild prom to keep us interested.

“Days” spoilers indicate that Ciara (Vivian Jovanni) will still be feeling a bit “blah” about the whole thing. In light of everything she’s been through, Ciara just isn’t in a prom kind of mood. Nevertheless, Theo (Kyler Pettis) will hope this will be an evening to remember. Uh-oh. Be careful what you wish for!

It appears prom night will get a little out of hand. DOOL’s weekly preview video shows Ciara phoning her mother with some bad news. At the police station, Ciara will announce that she’s been arrested.

Hope (Kristian Alfonso) will be shocked by Ciara’s call. What has her baby girl done?! It turns out Ciara will be taken into custody on vandalism charges. 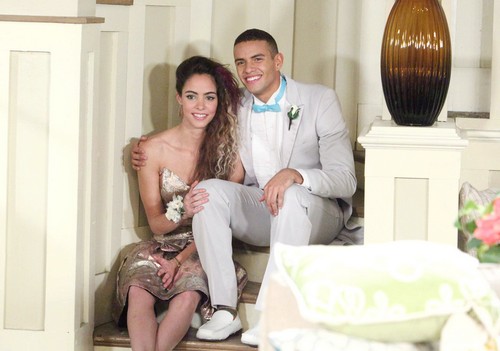 “Days of Our Lives” spoilers say Joey (James Lastovic) and Claire (Olivia Rose Keegan) will face the same accusations. A casting call went out a few months ago for a judge whose property had been vandalized. This judge also happens to the father of that pushy jock, Mark (Connor Weil).

Perhaps the gang will try to send Mark a message by wrecking his home. On the other hand, it’s possible that Mark will simply make it look like they did it. After all, Mark undoubtedly has an ax to grind after being pummeled by Theo.

Whatever the story is, it can’t be good. Of course, no one would be surprised to hear that Ciara was acting out. The rape has taken a toll on Ciara and she’s just not thinking clearly. DOOL spoilers suggest this is only the beginning of Ciara’s problems.

You can expect Hope to have a tough time handling Ciara in the coming weeks. Ciara is legally an adult now and that’s going to be important moving forward. She’ll be making decisions for herself and there’s nothing Hope can do about it.

Stick with “Days of Our Lives” for updates on what’s ahead for this troubled teen.

So “Days” fans, what do you think about Ciara’s arrest? Will she manage to get off the hook? What about Claire and Joey? Will they all settle down after this rowdy prom night?