Days of Our Lives (DOOL) Spoilers: Is Chandler Massey Returning as Will Horton – Former Publicist Weighs In 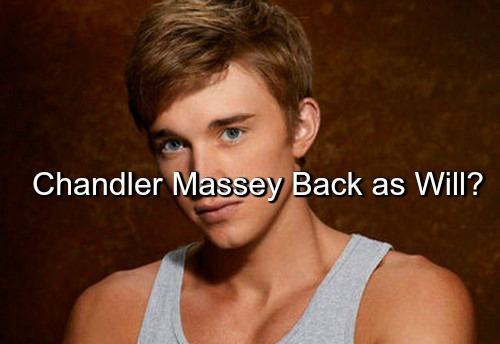 “Days of Our Lives” spoilers reveal that we could be seeing a familiar face in Salem soon. There’s been a lot of buzz about the idea of Chandler Massey returning to the role of Will Horton and it seems like it could be a real possibility. Massey’s former publicist, Jeffrey Ballard, had some interesting comments on the actor’s potential future at DOOL. He used a Facebook post to convey his thoughts on the matter.

Ballard said, “I’ve been getting quite a few calls about this – so for the record – I can neither confirm nor deny that my former client and good friend, three-time Daytime Emmy Award winning actor Chandler Massey will be returning to his role of Will Horton on Days of Our Lives this year. I guess you will all have to keep watching!”

While Ballard obviously can’t say it’s a done deal, the fact that he’s even talking about it could be a positive sign. Since a photo recently surfaced that appears to show Freddie Smith (Sonny) on set, it sounds like we could see Will and Sonny reunited down the road. That would be a treat for “WilSon” fans! 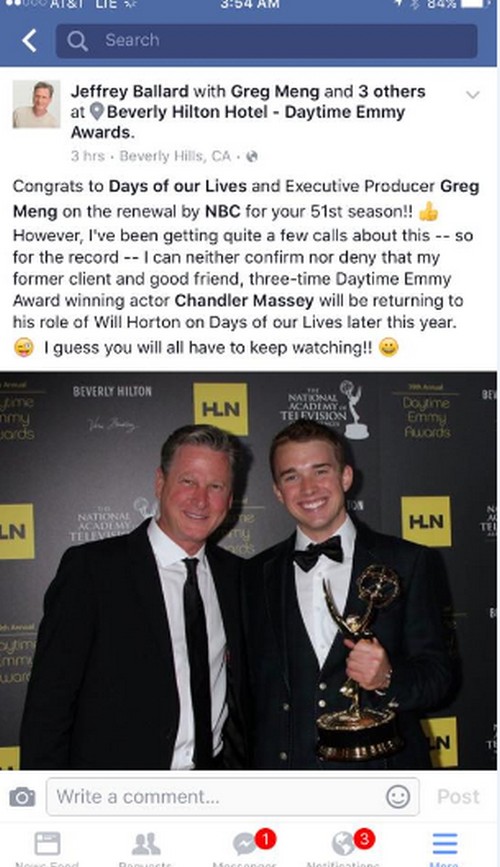 Of course, “Days” will have some explaining to do if Will suddenly shows up. DOOL viewers know that Will was brutally murdered by Ben (Robert Scott Wilson), but it’s easy to bring characters back from the dead on a soap. The easiest explanation would be that Will was swapped with a lookalike while he was out in California. After all, that’s when Will’s atrocious behavior really started.

Perhaps the true Will was being held hostage all this time and his evil doppelganger was the one who bit the dust at the hands of the necktie killer. That would be a way to bring Will back AND redeem his character. We could kill two birds with one stone.

As for the person behind the kidnapping, all roads lead back to Stefano DiMera (Joseph Mascolo). Stefano might’ve wanted to hurt Sami (Alison Sweeney), but he may have needed some answers from Will first. Bottom line, it wouldn’t be that difficult to provide an excuse for Will’s return.

Many “Days of Our Lives” viewers would be happy to have Chandler Massey back in the role. Stick with CDL for updates on this developing story.

So “Days” fans, what do you think about the news from Chandler Massey’s former publicist? Do you believe Will might be headed back to Salem? Voice your opinion in the comments below and don’t forget to check CDL often for the latest “Days of Our Lives” spoilers, updates and news.