BY Monica DelRay on May 28, 2016 | Comments: 4 comments
Related : Days of Our Lives, Soap Opera, Spoiler, Television 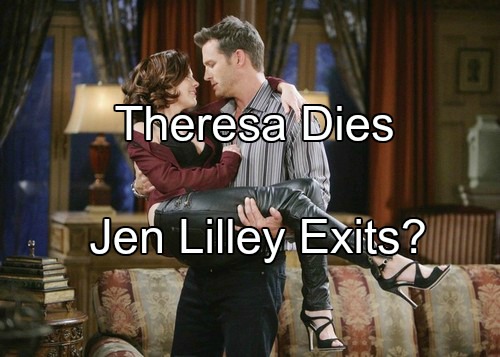 “Days of Our Lives” (DOOL) spoilers tease that one character could be on her way out at the NBC soap. Serial Scoop released a blind item that points to the exit of an actress involved in a popular pairing. Normally, these blind items could be for any of the four soaps. However, the post was originally filed under “Days of Our Lives” and “Days casting.”

Although it was later changed, it’s worth pointing out.

We don’t know for sure which DOOL star might be departing, but we’d say Jen Lilley (Theresa) is a strong possibility. Let’s look at the evidence. Over the last few weeks, there was a noticeable decrease in photos of Jen Lilley on set.

Whenever a picture was posted on social media, it was typically an older shot.

We’ve also observed that Jen Lilley has been taping quite a bit less than her coworkers. For example, her typical scene partners might be tweeting about being at work on while Lilley noted that she was not. Red flags started going up.

Days of Our Lives spoilers say that the lack of pictures and airtime could be an indication that Theresa will develop a health issue. Perhaps no photos could be released because Theresa spent most of her time in a hospital gown. We know that “Days of Our Lives” tries to keep this stuff under wraps for as long as possible. Pics like that would have tipped people off right away.

Another piece of evidence was Eric Martsolf’s (Brady) tweet about doing some “serious soap” with Lilley. She gushed over his work as well. Were they filming Theresa’s death scenes?

Next, there was a deleted tweet from Larry Poindexter, who plays Father Louie. He hinted that he was working with Charles Shaughnessy (Shane) and Patsy Pease (Kim) recently. The accompanying picture showed that they were filming on the St. Luke’s set.

Since Theresa’s parents were back and they were in a church, it wouldn’t be a stretch to assume that a funeral was underway. The blind item hinted that some of the character’s family members might return to say goodbye. It also suggested that some viewers will be bummed about this departure while others won’t really mind. That seemed to line up with Theresa, too. She’s definitely a polarizing character.

Love her or hate her, Theresa has been a major player on “Days” since her debut in 2013. She began as a scheming druggie, but she’s turned into a loving mom with a hot temper. It’s been interesting to watch the character progress.

Alas, it certainly appears that Theresa may be headed for the exit door. The blind item mentioned that it was a “done deal,” but it would take a while to see all of this play out on screen. That’s mostly due to DOOL’s taping schedule, but an illness could be a factor. Theresa might experience a slow decline.

Many of us will miss Theresa if she’s indeed the one who’s leaving. We’ll give you updates if we hear any official news about Jen Lilley’s potential departure. Chime in with your thoughts in the comments below and don’t forget to check CDL often for the latest “Days of Our Lives” spoilers, updates and news.