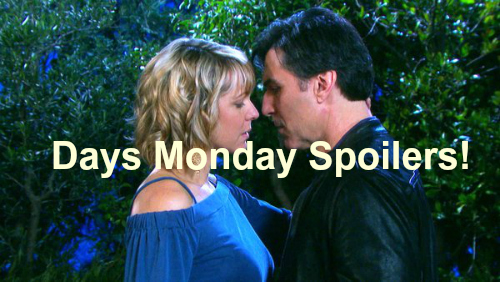 “Days of Our Lives” (DOOL) spoilers reveal that Kayla (Mary Beth Evans) will be relieved when she learns Joey (James Lastovic) is safe. Like his father, Joey has a tendency to end up in dangerous situations. While Steve (Stephen Nichols) can take care of himself during the peril, Joey typically just creates more chaos.

Nevertheless, Joey made it out of his latest adventure alive and that’s all Kayla really wanted. Of course, Joey still has legal issues to deal with. He’s been arrested, but DOOL spoilers say he’ll get out of jail soon. Perhaps Joey will make bail or he’ll turn in the other commune criminals in exchange for his freedom. Joey refused to talk before, but he might decide to snitch after all.

Regardless, Joey will rejoin Steve and Kayla soon. It looks like the whole ordeal will give Kayla a new perspective. “Days” viewers know that Kayla has been concerned about the threat Steve poses to her family’s safety. She wants what’s best for Joey and she thought splitting up with Steve was the right thing to do.

However, Joey seems to get in trouble without any help from Steve. He’s a rebellious teenager and having Steve in the picture might actually be beneficial. Steve wasn’t around to guide his son throughout most of Joey’s life. He needs the chance to step up and be a dad now.

Kayla has tried to push down her feelings for Steve, but she can’t deny that she loves him. Steve and Kayla are soul mates. There’s nothing they can do about it. “Days of Our Lives” spoilers indicate that Fynn (Alexander Bruszt) will finally start to understand that. He’s fallen hard for Kayla, but he’ll realize that he should let her go.

In fact, Fynn might give Kayla a little push to reunite with her ex. He can tell that Steve is the one and only man Kayla will ever be truly happy with. DOOL spoilers tease that Fynn and Kayla will agree to stick to friendship. Kayla will decide to head home with Steve and Joey. She’ll hope they can all get back to their normal lives.

Unfortunately, Kayla’s health is failing and she’ll have another episode just as they’re about to leave Los Angeles. Kayla will recover eventually, but this incident will give Steve and Joey quite a scare. Stay tuned to “Days of Our Lives” for updates on this family’s future.

So “Days” fans, what do you think about the news that Fynn will give up on Kayla? Will Kayla fully reunite with Steve? What about Kayla’s declining health? Will she lean on Steve and Joey during this crisis? Voice your opinion in the comments below and don’t forget to check CDL often for the latest “Days of Our Lives” spoilers, updates and news.