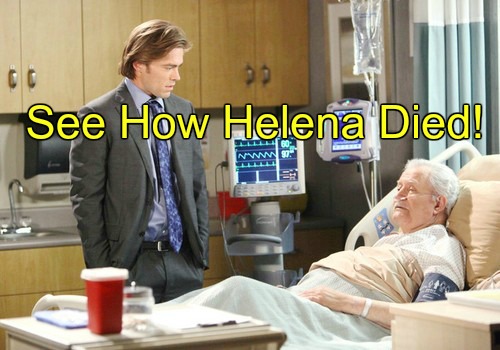 “Days of Our Lives” spoilers tease that on tomorrow’s episode, Friday, April 15, Victor (John Aniston) will begin to recall some dark memories from his time in Greece. Thanks to Deimos (Vincent Irizarry), we now know that Nicole (Arianna Zucker) looks almost identical to Helena. Their hair color is the only difference.

Of course, DOOL viewers know that Arianna Zucker is actually playing a dual role. The show plans on milking this doppelganger idea for all it’s worth. “Days of Our Lives” spoilers indicate that Victor will remember the tragic events that led to Helena’s death. We’ll see flashbacks of their encounter near the cliff.
As we already mentioned, Zucker will be portraying Helena. Meanwhile, Christos Vasilopoulos will play a younger version of Victor. Up until this point, we’ve only heard Helena crying out in Victor’s memories. Now we’ll get a chance to find out what really went down that fateful day. “Days” spoilers hint that we’re in for some major Greek drama and tragedy.

Victor has been telling Maggie (Suzanne Rogers) that Helena fell over the edge and he let Deimos take the blame. It was payback for cheating with Victor’s fiancée. Deimos spent 30 years in prison for a crime he didn’t commit. Although Deimos’ actions have been unbelievably evil, at least we know why he’s so determined to get revenge.

As Victor reflects on his regrets, Philip (John-Paul Lavoiser) will stop by his hospital room. DOOL spoilers reveal that Philip will beg for forgiveness from his father. Will Victor realize that life is too short to push away the ones you love? It’s tough to say.

A brush with death can drastically change a person’s perspective. However, that may not necessarily apply to Victor. Vic tends to hold grudges, as we see in situations like his feud with Deimos and his relentless hatred for Theresa (Jen Lilley).

Still, there’s hope for Philip and maybe even Jeannie T. Victor will probably never forgive Deimos for what he put Maggie through, but everyone else has a shot at winning him over. Stick with “Days of Our Lives” for updates on Victor’s outlook.

So “Days” fans, what do you think about the news that we’ll see flashbacks of Helena and Victor? Did Victor shove Helena over that cliff? Will Philip’s groveling pay off or will Victor make his son wait a little longer for mercy?