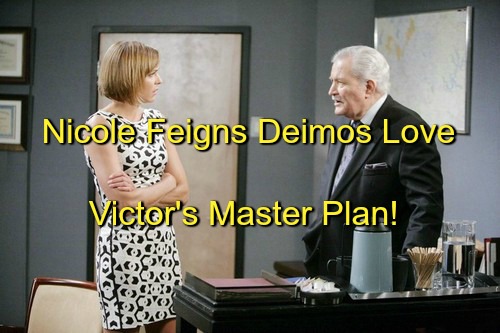 “Days of Our Lives” (DOOL) spoilers tease that Victor’s (John Aniston) epic revenge plot will get underway. Several Salemites will soon be seeking vengeance. Deimos (Vincent Irizarry) hasn’t been in town long, but he’s certainly made his presence known. DOOL’s newest villain is a force to be reckoned with.

Hope (Kristian Alfonso) and Rafe (Galen Gering) will gather clues that connect Deimos to Bo’s (Peter Reckell) kidnapping. They’ll hope they can find enough proof to lock Deimos up. However, Victor’s the one who’s really out for blood. He wants to take Deimos down and he intends on using Nicole (Arianne Zucker) to do it.

Nicole has been trying to leave her scheming days behind her. Nevertheless, she’ll have to let her conniving side come out of retirement for this grand plan. Victor wants Nicole to worm her way into Deimos’ heart. It shouldn’t be too tough since Nicole looks just like Deimos’ former flame.

Once Nicole has Deimos right where she wants him, she can take him for everything he’s got.

Of course, Nicole will have some work to do first. “Days of Our Lives” spoilers say Nicole will begin by asking Deimos about Helena (Arianne Zucker). She’ll urge Deimos to open up in hopes that he’ll let his guard down.

Later, Victor will give Nicole further instructions. They have to handle all of this very carefully. If Nicole messes this up, she could be next on Deimos’ vengeance list. “Days” spoilers reveal that Victor and Nicole will eventually deliver the final blow of this secret scheme.

They actually seem to be taking the high road here. Deimos was willing to poison an elderly lady to steal Victor’s home and wealth. His actions led to Maggie’s (Suzanne Rogers) crippling fall. Victor is simply focused on taking back what’s rightfully his.

He just has to go through Nicole or he’ll risk starting a full-blown war. In fact, that may happen anyway.

DOOL viewers can expect things to get heated when Deimos and Victor have another showdown next week. Victor will try to keep his cool in light of his recent heart attack. Deimos, on the other hand, will blow his top as Victor makes him feel guilty about Helena’s death.

Stick with “Days of Our Lives” for updates on Deimos’ outburst.

So “Days” fans, what do you think about the news that Victor and Nicole will work hard for retribution? Will their efforts pay off? Is Deimos the kind of guy who can truly be stopped? Voice your opinion in the comments below and don’t forget to check CDL often for the latest “Days of Our Lives” spoilers, updates and news.