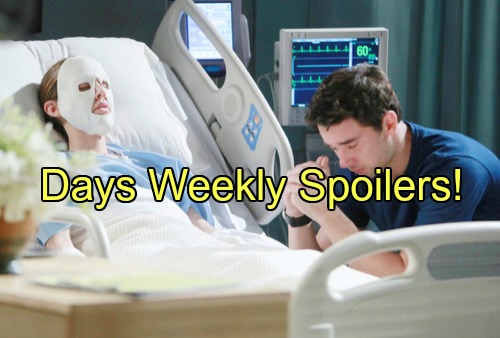 “Days of Our Lives” (DOOL) spoilers for this week’s episodes of June 13-17 tease that we’ll see some tense showdowns and emotional moments. For starters, Dirk (Reiley McClendon) will completely lose it at the commune. After killing a store clerk, Dirk will be a wanted man.

Things will get heated and Dirk will fire a shot. DOOL spoilers reveal that Joey will be hospitalized with life-threatening injuries. Steve (Stephen Nichols) and Kayla (Mary Beth Evans) will be devastated by the news of the shooting. They’ll hold each other close as they worry about their son’s fate.

After emergency surgery, Days of Our Lives spoilers let on that Joey will pull through. Maybe Joey and his family will get a chance to relax soon. In Salem, John (Drake Hogestyn) will finally make it home. He was happy to help out with Steve’s search, but he’ll be grateful to get back to Marlena (Deidre Hall).

It appears the time away has given John some clarity. He’ll ask what Marlena thinks about the idea of getting remarried. Meanwhile, Theresa (Jen Lilley) will also have marriage on her mind.

“Days of Our Lives” spoilers suggest that Theresa will push Brady (Eric Martsolf) for a quickie wedding in hopes of shutting down Summer’s (Marie Wilson) pursuit.

The romance will continue when Adriana (Alma Delfina) expresses her feelings for Eduardo (A Martinez). These two have shared several warm moments lately and it looks like their reunion is on track. Elsewhere, “Days” spoilers say Philip will find a new love interest and they may indulge in a fling.

Now that Belle (Martha Madison) has resumed her relationship with Shawn (Brandon Beemer), Philip is definitely up for a distraction.

Other DOOL spoilers indicate that Victor (John Aniston) will stab Nicole (Arianne Zucker) in the back by striking a deal with Kate (Lauren Koslow). Nicole should’ve known better than to team up with Victor. Once Nicole gets updates on Victor’s latest move, she’ll be on the warpath.

Unfortunately, Nicole’s plan to retaliate will only result in her arrest. Dario (Jordi Vilasuso) will be in the same boat.

At Shady Hills, Chad (Billy Flynn) will be stunned to learn Abigail (Kate Mansi) has been injured in a fire. A bandaged and masked Abigail will insist that she saw Ben (Robert Scott Wilson) again. Poor Chad will begin to lose hope.

Stick with “Days of Our Lives” to watch Chad deal with this crisis.

So “Days” fans, what do you think about all of the love and action this week? Are you looking forward to these storylines? Voice your opinion in the comments below and don’t forget to check CDL often for the latest “Days of Our Lives” spoilers, updates and news.