‘Days of Our Lives’ Spoilers: Aiden Killed Off in Midst of Clyde Chaos – Past Comes Back to Haunt Crooked DA 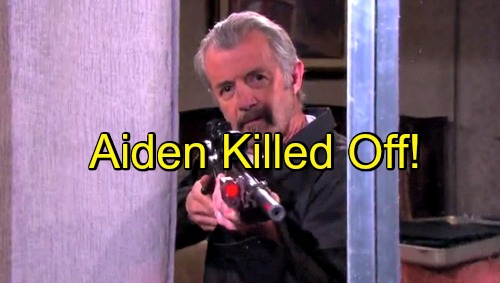 Days of Our Lives (DOOL) spoilers tease that Aiden (Daniel Cosgrove) has exactly what he needs to take Hope (Kristian Alfonso) down. Thanks to a hidden cell phone, Aiden was able to record Hope and Rafe’s (Galen Gering) entire conversation. Naturally, they spilled all of the dirty details on Stefano’s (Joseph Mascolo) murder.

Aiden is undoubtedly thrilled that his plan worked perfectly. Now Aiden just has to begin the next phase. DOOL fans know that Aiden has a blackmail scheme in mind and he’ll soon fill Hope in on it, too.

Days of Our Lives spoilers state that Aiden will produce the proof and demand an admission from Hope. Since she’s been caught, Hope might as well confess. She’ll immediately want to know what Aiden wants from her. He may not reveal everything he has planned right away, but he’ll keep Hope posted.

Hope’s day of reckoning will eventually arrive. Days spoilers indicate that Aiden will request another important meeting. He’ll likely want to discuss the idea of moving to Portland and being a family again. 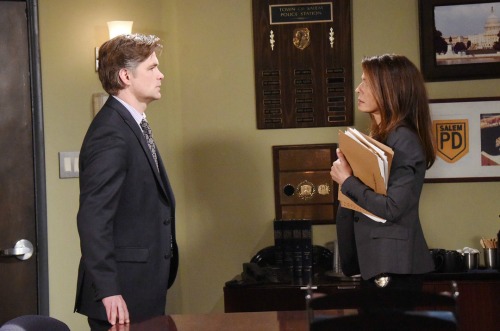 Later, Hope will give Rafe updates on Aiden’s startling news. She’ll fear that they could be in deep trouble if she doesn’t obey Aiden’s orders. They could go to prison and this could be a massive scandal for the Salem PD. Rafe will do his best to keep Hope calm as they figure out their next move.

Aiden certainly has the upper hand for now, but we have to wonder how the crooked DA will make his Days exit. They could send Aiden out of town, but why would he go voluntarily? It seems death might be the only thing that could get Aiden out of the picture. Fortunately, Clyde (James Read) is already plotting against the man who put him behind bars.

Aiden messed with the wrong guy and it’s about to come back to bite him. Here’s where it gets tricky. It’s possible that Clyde will kill Aiden and that will be the end of it. Still, we should consider some other options for this storyline.

After Clyde shoots Abe (James Reynolds) at a press conference, Theo (Kyler Pettis) will be on a mission for vengeance. He’ll obviously be after Clyde, but what if Aiden gets in the way? It’s not out of the question to think that Theo could accidently kill Aiden. We do know that Theo has courtroom scenes coming up at some point.

On the other hand, Clyde could realize that Theo was targeting him. He could decide to take this teen punk down a peg. Aiden might sacrifice his own life to save Theo’s by diving in front of him or something along those lines. He has a son the same age. Aiden might want to save Abe the unbearable pain of losing a child.

A final act of heroism might actually be nice to see. Whatever the case, Aiden may meet a grisly end before long. Days of Our Lives viewers will be anxious to see what’s in store. We’ll let you know when more details emerge. Stay tuned to DOOL and don’t forget to check CDL often for the latest Days of Our Lives spoilers, updates and news.