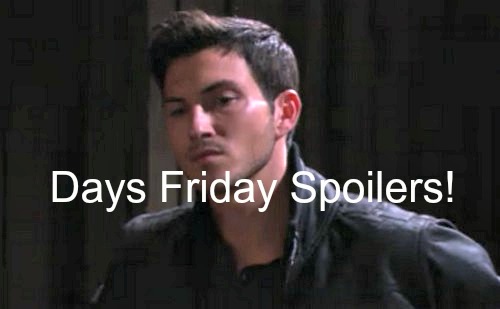 “Days of Our Lives” spoilers for Friday’s episode, March 11, tease that John (Drake Hogestyn) and Eduardo (A Martinez) will be forced to defend themselves when gunfire breaks out. They’ll whip out their weapons and fight back.

Rafe (Galen Gering) will show up with Lani (Sal Stowers) and JJ (Casey Moss) just before this dangerous showdown. It looks like the kidnappers won’t appreciate the surprise guests.

Days of Our Lives spoilers warn that someone will take aim at Rafe and Eduardo will dive in front of him. Rafe has been slow to warm up to his father, but the fact that Eduardo is willing to take a bullet for him should help. Marlena (Deidre Hall) and Arianna (Harper and Sydnee Udell) will be taken to safety while John becomes a new prisoner.

DOOL spoilers indicate that John will wake up chained to a pole in an unknown location. He’ll soon find out that his own father was behind all of this. “Days” viewers can expect this plot to get very complicated. John’s dad, Yo Ling (Tobin Bell), has some secrets that will blow your mind.

Elsewhere, Chad (Billy Flynn) and Abigail’s (Kate Mansi) wedding will get underway. Unfortunately, “Days of Our Lives” spoilers say an unexpected Ben (Robert Scott Wilson) sighting will halt the nuptials briefly. Abigail will cry out as she catches a glimpse of the deranged killer.

Chad and JJ will give the grounds a thorough examination, but they won’t find a trace of Ben anywhere.

Days spoilers tease that Abigail will confess that maybe she was imagining things. The stress of Ben’s escape is obviously taking a toll on Abby. She’ll quickly shake off the scare and proceed with the ceremony. According to Soap Opera Digest, Kate Mansi actually wrote Abigail’s vows. “Chabby” fans won’t want to miss watching their favorite DOOL couple tie the knot.

We’ll also see Ciara (Vivian Jovanni) open up to Theo (Kyler Pettis) at the wedding. It’s nice that these two will make it to the celebration. Ciara could use a distraction and Theo is the only family member that Chad invited.

Theo will offer his support to Ciara as she continues to deal with the aftermath of Chase’s (Jonathon McClendon) actions. Stick with “Days of Our Lives” for updates on their blooming bond.

So “Days” fans, what do you think about the news that Eduardo will take a bullet for Rafe? Will John get out of this mess unscathed? Is Abigail losing touch with reality? Are you glad Ciara has Theo to lean on?