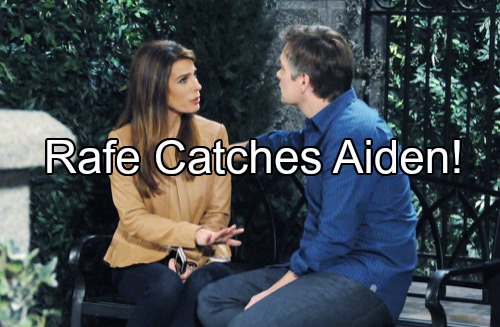 Days of Our Lives (DOOL) spoilers tease that Blanca (Ximena Duque) will weigh in on Rafe’s (Galen Gering) love life. Adriana (Alma Delfina) summoned Blanca to Salem under the guise of helping out. However, Blanca quickly picked up on the real reason for her visit.

It’s obvious that Adriana hopes to spark something between Blanca and Rafe.

Blanca doesn’t seem to be opposed to the idea. She’s interested in Rafe, but she also knows he’s hung up on Hope (Kristian Alfonso). Blanca might be willing to wait for a while, but Rafe can’t expect her to stay single forever. Besides, it’s not good for Rafe to pine indefinitely.

Days spoilers say Blanca will urge Rafe to give up his quest for Hope’s heart. Blanca will suggest that Hope has moved on and Rafe should follow her lead. Maybe Blanca will argue that Rafe should stop looking back and focus on what’s right in front of him.

Rafe is trying to let go, but he still wants to maintain a friendship with Hope. They’re partners at work and Rafe truly cares about his ex. Besides, Rafe doesn’t trust Aiden (Daniel Cosgrove). He’s worried that Aiden is up to something and he intends on finding out what it is.

Days of Our Lives spoilers reveal that Rafe will learn information that proves Aiden’s guilt. He’ll check the security tapes at the jail and realize that Aiden has had several meetings with Andre (Thaao Penghlis). Of course, Andre has a plan to bring Rafe down.

That plot will undoubtedly be in motion in the near future.

As for Blanca, she may find a new Hernandez to flirt with. Once Blanca gets hired as a nurse at the hospital, she’ll want to celebrate. DOOL spoilers say Blanca will join Dario (Jordi Vilasuso) for a night on the town. Perhaps they’ll commiserate over drinks.

They both have issues they’re facing at the moment.

Blanca hasn’t been able to pull Rafe closer. Plus, she has some hidden baggage that she’d like to forget about. Dario can’t seem to get past what his father did to his family. Everyone else has forgiven Eduardo (A Martinez), but Dario just isn’t to that point yet.
Dario is also falling for Nicole (Arianne Zucker), but she’s got her own set of problems. Nicole is facing a murder investigation and she’s been slow to think of Dario as more than a friend. It’s tough to say if this relationship will truly pan out.

It sounds like love is getting complicated in Salem. Other DOOL pairings could experience shifts soon as well. Some couples will survive and thrive, but others are sure to crash and burn. Stick with Days of Our Lives for updates on who’s in it for the long haul.

So Days fans, what do you think about the news that Blanca will push Rafe to give up on Hope? Will Blanca take an interest in Dario? Would Dario be on board with that idea or does he really feel something special for Nicole?