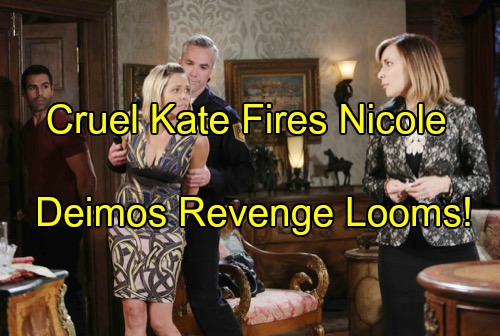 Days of Our Lives (DOOL) spoilers tease that Victor (John Aniston) will get on Brady’s (Eric Martsolf) last nerve. It’s no secret that Victor loathes Theresa (Jen Lilley), but Brady feels like it’s time for his granddad to get over it. He intends on making Theresa his bride. Brady will urge Victor to make some updates to his way of thinking.

It’s easy to understand why Victor is hesitant to trust Theresa. She’s done a lot of horrible things in the past. For example, Theresa once tricked Brady into marrying her when he was drunk. After their quickie in Las Vegas, Theresa whacked John (Drake Hogestyn) in the head with a fireplace poker and he ended up in a coma.

Of course, Theresa also happened to be a druggie who was allergic to work.

Victor still has a bad taste in his mouth when it comes to Theresa, but she really has turned her life around. She’s trying to juggle caring for a child, running a fashion business, planning a wedding and fighting off Summer (Marie Wilson). The Theresa we’re seeing now is a far cry from the harsh and lazy one we used to know.

Brady will defend his fiancée and the positive changes she’s made. When Victor continues to rant about Theresa, Brady will take a stand. Days of Our Lives spoilers say Brady will warn Victor to dial down the attacks. He’ll insist that Vic needs to show his wife-to-be some respect.

Unfortunately, Victor probably isn’t capable of adjusting his attitude at this point. He’s too stubborn and proud to be truly civil. DOOL spoilers suggest that Victor may have a few tricks up his sleeve. Theresa will need to watch out for Summer (Marie Wilson), too. Trouble is lurking…

Meanwhile, more trouble is headed for Nicole (Arianne Zucker) as well. Days spoilers indicate that Kate (Lauren Koslow) will deliver another blow by announcing that Nicole is fired. Deimos (Vincent Irizarry) brought Nicole on board to run Basic Black at Titan Industries. However, that’s Kate’s baby now and she’s giving Nicole the boot.

Nicole shouldn’t be too surprised. The cops suspect she killed her boss. Nicole obviously can’t just show up for work as usual. Kate wants to make Nicole’s life miserable and this is one more way to make that happen.

Nicole is feeling pretty low, but she’ll have a chance to watch Kate pay the price soon. Days of Our Lives spoilers reveal that Deimos will come up with a sneaky scheme to get revenge. Nicole may not support every aspect of Deimos’ plot, but she’d certainly like to see Kate go down.

Stick with DOOL to find out what’s in store.

So Days fans, what do you think about the news that Brady will blast Victor for constantly attacking Theresa? As the wedding looms, will Victor make any final efforts to keep Brady and Theresa apart? What about Nicole’s string of bad luck?

Will Deimos help Nicole emerge victorious? Voice your opinion in the comments below and don’t forget to check CDL often for the latest Days of Our Lives spoilers, updates and news.