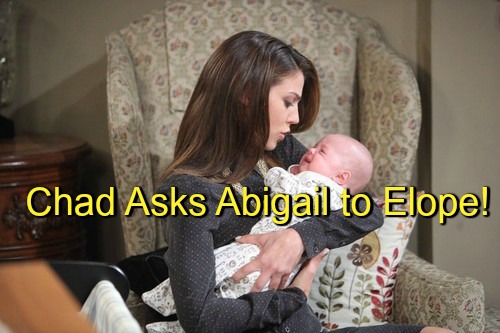 “Days of Our Lives” spoilers tease that Chad (Billy Flynn) will continue making plans for a bright future with Abigail (Kate Mansi). Unfortunately, Andre’s (Thaao Penghlis) latest revelation could throw those plans off course. DOOL spoilers say Andre will give Chad updates on the new evidence. He’ll insist that Hope (Kristian Alfonso) is to blame for Stefano’s (Joseph Mascolo) death.

Chad will have a tough time believing that Hope really pulled that trigger. There’s a good chance Chad still won’t buy that Stefano was even murdered. Nevertheless, Andre will try to persuade Chad that he’s telling him the shocking truth, which of course he is.

Eventually, Chad will start to accept that his father could be dead. The loss will undoubtedly hit Chad hard. Stefano wasn’t exactly the world’s best dad, but Chad had a soft spot for him deep down. “Days of Our Lives” spoilers suggest that Chad will cling to his new family as a result of Andre’s bombshell. It sounds like Chad won’t want to waste a minute in making Abigail his wife.

Chad will propose an idea that will puzzle Abby. DOOL spoilers indicate that Chad will ask Abigail to elope. Abby will be taken aback by the thought of a quickie wedding without any of their friends or family members present. She’ll wonder why Chad suddenly wants to get married right away.

Chad will probably be hesitant to open up, but Abigail may be able to pry his true motive out of him. “Days” fans know that Chad was very supportive of Abigail throughout her traumatic ordeal with Ben (Robert Scott Wilson) and her struggle to get her son back. Likewise, Abigail stood by Chad even when he was a brainwashed jerk.

Abby will remain in Chad’s corner as he tries to deal with his feelings. Perhaps this experience will bring them closer as a couple. Abigail may talk Chad out of eloping or she might choose to go along with the idea. Either way, many DOOL viewers are hoping for a “Chabby” wedding before Kate Mansi’s last air date this May or June.

We’ll likely see an Abigail recast down the road, but it’s doubtful we’ll see one immediately after Mansi’s onscreen departure. It could be a while before a new Abby might make it to the altar. Let’s hope Chad and Abigail’s wedding preparations won’t get derailed. Stick with “Days of Our Lives” to see if they’ll tie the knot soon.

So “Days” fans, what do you think about the news that Chad will want to elope? Will Abigail agree or convince Chad to hold out for a full-fledged ceremony? Will Abigail help Chad come to grips with Stefano’s death?