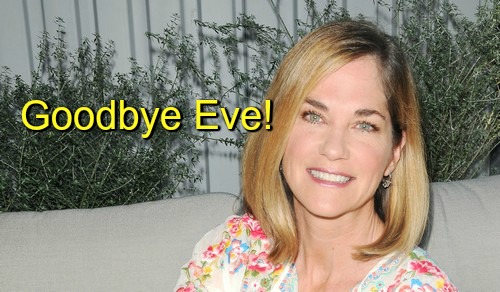 “Days of Our Lives” spoilers (DOOL) for Tuesday, February 2, tease that big changes are coming to Nicole (Arianne Zucker) and Theresa’s (Jen Lilley) careers. They’ve been talking about the idea of ditching Kate (Lauren Koslow) and starting their own label. Now they’re ready to put that plan into action.

Theresa and Nicole will take the first step toward freeing themselves from Kate’s bossiness. They’ll try to do things their way with a little help from Brady (Eric Martsolf). Of course, Brady isn’t going to have much time for business just yet. First, he’ll focus on trying to decipher his latest dream. DOOL spoilers say Brady will see the image of a mysterious woman, but he won’t quite be able to visualize her face.

Fortunately, this mystery will begin to unravel. Brady will soon get a clear view of the woman’s appearance and he’ll head off on a mission to find her. “Days of Our Lives” spoilers suggest that Brady will learn some surprising facts about Daniel’s (Shawn Christian) past during his trip to California. These revelations could have a profound impact on what Brady decides to do next.

Meanwhile, “Days” spoilers say Belle (Martha Madison) will throw a major temper tantrum. Eve (Kassie DePaiva) and Claire (Olivia Rose Keegan) have been growing closer over the past few weeks and Belle is obviously feeling threatened. Belle is having a tough time connecting with Claire and she thinks Eve is a huge part of the problem.

In reality, Belle needs to make an effort to bond with her daughter instead of thinking about men. It’s no wonder that Claire looked elsewhere for a mother figure. Nevertheless, Belle will announce that this is the end of Eve’s mentoring.

DOOL spoilers indicate that Belle will order Eve to stay out of Claire’s life. Since Kassie DePaiva tweeted that this would be her last air date, it sounds like Eve will obey Belle’s orders. Stick with “Days of Our Lives” for updates on Eve’s final scenes.

So “Days” fans, what do you think about the news that Nicole and Theresa will take a daring stand against Kate? Will they decide to go for it and leave Kate in the dust? What other clues could Brady pick up from his dreams? Will you miss Eve once she heads out of Salem? Voice your opinion in the comments below and don’t forget to check CDL often for the latest “Days of Our Lives” spoilers, updates and news.