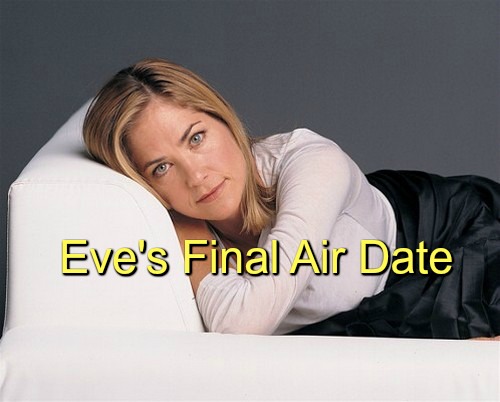 “Days of Our Lives” spoilers tease that DOOL viewers will be saying goodbye to Eve (Kassie DePaiva) soon. Kassie DePaiva recently tweeted that her last air date will be Tuesday, February 2, which means you better catch her while you can. Now that we have a timeframe for Eve’s exit, we can start guessing where things might be headed.

Justin (Wally Kurth) helped Eve get through the trauma of losing Paige (True O’Brien), but it seems their connection is fizzling. Eve asked Justin where their relationship was going and he admitted that he couldn’t give her a firm commitment right now. There’s a good chance Eve will decide that just doesn’t work for her.

Eve has faced a lot of sorrow over the last few months and she doesn’t want to get hurt again. It might be better to break it off now before they get in too deep. That would take care of that part of Eve’s life in Salem, but she’ll still have some unfinished business as far as Claire (Olivia Rose Keegan) is concerned.

“Days” fans know that Eve has taken Claire under her wing as a protégé lately. It’s brought Eve great joy to think that she could help a talented young girl like Paige. Unfortunately, that’s sort of the problem. As Justin pointed out, Eve appears to be using Claire as a stand-in for her deceased daughter and that’s not doing anyone any favors.

Eve scheduled an audition at Julliard and she’s pushing Claire to go for it. “Days of Our Lives” spoilers indicate that Belle (Martha Madison) won’t be pleased when Eve continues to overstep her boundaries. Belle will eventually rip into Eve for meddling in Claire’s life. She’ll insist that Claire only has one mom and it’s not Eve.

Enjoy these last few grains of sand in my ⌛️. My last air date on @nbcdays is 2/2. Time is running out. #DAYS

It sounds like Eve will realize there could be some truth to Justin’s claims. It’s probably not healthy for Eve to use Claire as a substitute for Paige. Perhaps DOOL is prepping for a classic “I’m leaving to find myself” exit. Maybe Eve needs to learn who she is outside of being a girlfriend or a mother figure.

Nevertheless, Eve really has a knack for teaching music. She may decide to impart her gifts in another community. Eve could always head to California to spend more time with Kim (Patsy Pease) and Shane (Charles Shaughnessy). Whatever happens, many “Days of Our Lives” viewers are going to miss Eve when the sand runs out of her hourglass. We’ll give you updates as we learn more about Eve’s exit.

So “Days” fans, what do you think about the news that Kassie DePaiva’s last air date is rapidly approaching? Will you be sad to see Eve go? Voice your opinion in the comments below and don’t forget to check CDL often for the latest “Days of Our Lives” spoilers, updates and news.