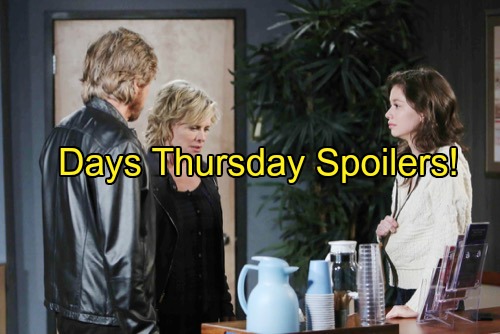 Days of Our Lives (DOOL) spoilers for Thursday, June 16, tease that we’ll see some tense moments for Steve (Stephen Nichols) and Kayla (Mary Beth Evans). After a hostage situation went down at the commune, Dirk (Reiley McClendon) ended up shooting Joey (James Lastovic).

It looks like the bullet hit a major organ and now Joey is going to need emergency surgery.

Jade (Paige Searcy) will join Steve and Kayla at the hospital. They’ll wish there was something more they could do for Joey. Unfortunately, waiting is all that’s left. Joey’s doctors will work hard to keep him alive, but that won’t make the ordeal any easier for his loved ones.

Once Joey comes out of surgery, he’ll show signs of improvement. DOOL spoilers say Steve and Kayla will be relieved that Joey is going to be OK. They’ll want to keep Joey out of trouble moving forward, but that’s probably not going to happen. 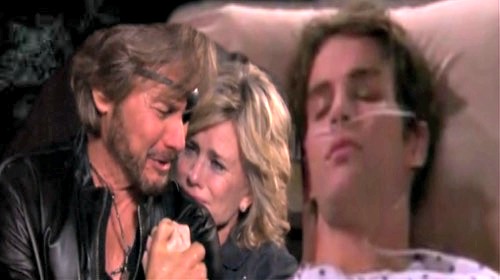 Other Days of Our Lives spoilers indicate that Chad (Billy Flynn) will feel terrible about letting Ciara (Vivian Jovanni) see him in his drunken state. He’ll give Ciara an apology and assure her that it won’t become the norm.

Ciara will let Chad know that she doesn’t judge him for trying to drink away the pain. She knows that life without Abigail (Kate Mansi) has been rough.

Elsewhere, John (Drake Hogestyn) will finally make it home from Los Angeles. He’s been away helping Steve look for Joey, but Marlena (Deidre Hall) has undoubtedly been on his mind the whole time.

Days spoilers reveal that John will have a chat with Marlena about love. He’ll insist that he wants to make her his wife again.

It might take a little convincing, but Marlena knows she wants this. DOOL buzz suggests Marlena and John will have a sweet wedding ceremony later this summer. “Jarlena” fans will be thrilled to see these two make it official. Let’s hope it will stick this time!

Meanwhile, Dario (Jordi Vilasuso) and Nicole (Arianne Zucker) will get caught at the Kiriakis mansion. They’re currently hiding in the closet, but they won’t be there for long. Once Kate (Lauren Koslow) meets with Philip (John-Paul Lavoiser), she’ll make a startling discovery.

Kate will call the cops over so her uninvited guests can be arrested.

Nicole will try to convince Roman (Josh Taylor) that she’s innocent and he’ll be inclined to believe her. However, it seems like everyone connected to Deimos (Vincent Irizarry) is desperate to pin his “murder” on Nicole.

Will Deimos eventually return and get Nicole off the hook? Stay tuned to Days of Our Lives for updates on where things are headed.

So Days fans, what do you think about the news that Joey will live to see another day? Will Ciara and Chad continue to bond? Will Marlena be receptive to John’s big idea? Can Nicole keep herself out of prison?