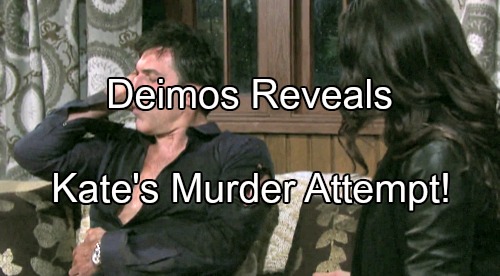 “Days of Our Lives” (DOOL) spoilers tease that Chloe (Nadia Bjorlin) will remain on edge as Deimos (Vincent Irizarry) recovers in her home. Chloe is still trying to process Deimos’ shocking revelations.

She thought he was a nice guy named Robert who did business with Titan Industries. Chloe is now reeling from the news that Deimos is actually the black sheep of the Kiriakis family.

Deimos’ appearance certainly didn’t improve Chloe’s opinion of him. When you have to warn a man not to die on your couch, you know he’s trouble. Days of Our Lives spoilers know that Chloe is undoubtedly afraid that Deimos will bring danger to her young son.

She won’t want to put Parker (Christian Ganiere) at risk.

Nevertheless, Chloe will let Deimos stick around a little longer. Deimos is normally a tough guy, but he’s showed a much more vulnerable side lately. That doesn’t mean Chloe feels entirely comfortable with Deimos around, but she’ll start warming up to him before long.

Days spoilers say Deimos’ subtle sweetness will come out through an interaction with Parker.

This meeting had to happen sooner or later. Chloe’s place looks fairly small and Parker is an inquisitive kid. If Deimos is around, Parker will want to know what’s up. Days of Our Lives spoilers indicate that Parker will instantly connect with Deimos.

They’ll be big buddies in no time. This should earn Deimos a few points with Chloe. There’s nothing she cares about more than her child.

Afterwards, Days spoilers state that Deimos and Chloe will share a deep conversation. It seems Deimos will finally open up about the predicament that almost caused his death. Once he explains the story leading up to their river encounter, Deimos will admit that Kate (Lauren Koslow) tried to kill him.

Of course, it wasn’t exactly attempted murder. Kate hurled Deimos toward a tree and he hit his head. Deimos became disoriented after the blow and he stumbled into the river. Still, Kate probably would’ve given Deimos an extra shove if he hadn’t fallen in himself.

Kate was out for blood that night.

Chloe will have no problem buying that Kate played a role in Deimos’ near-death experience. In fact, Kate once tried to kill Chloe for cheating on Lucas (Bryan Dattilo). Chloe knows how Kate can get when she wants revenge.

DOOL spoilers say Chloe will make a phone call to Nicole (Arianne Zucker). It appears Deimos will have revealed his feelings for Helena’s lookalike by then. Chloe will consider pumping Nicole for Deimos-related info.

Will Chloe go through with it or back out to avoid creating suspicion? Stick with “Days of Our Lives” for updates on Chloe’s next move.

So “Days” fans, what do you think about Deimos’ confession regarding Kate? Will Chloe help Deimos get his act together? Will Kate pay the price for her mistakes? How will Nicole fit in Deimos’ life moving forward?