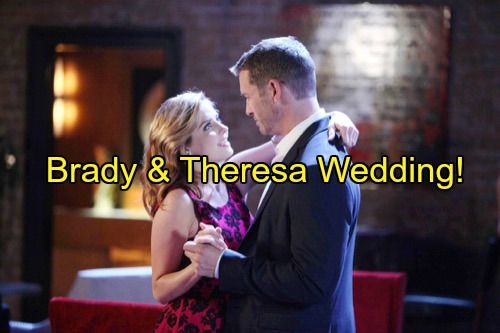 “Days of Our Lives” (DOOL) spoilers tease that Theresa (Jen Lilley) will decide that she needs to find a way to quench Summer’s (Marie Wilson) thirst for Brady (Eric Martsolf). Summer recently confessed her feelings and Brady gently shot her down.

However, Theresa won’t be sure she can trust Summer to truly back off. She’ll push for a quickie wedding and hope that saying “I do” will keep Summer out of the picture.

DOOL viewers know that Summer has had a crush on Brady for quite a while. She wasn’t too pleased when Brady derailed her plan to kill herself in the ocean, but she quickly warmed up to him. Now Summer is both eternally grateful and completely obsessed.

“Days of Our Lives” spoilers say Summer will open up to Maggie (Suzanne Rogers) as she tries to let go. She’ll be bummed that things didn’t work out like she wanted with Brady. It seems Summer had a fairytale in mind, but her happy ending just isn’t meant to be.

Maggie will try her best to cheer Summer up. Perhaps Summer’s prince will come someday. Right now, Summer just needs to focus on staying sane. “Days” has clued us in on the fact that Summer is a tad unstable. They’ve softened that idea slightly since her debut, but there’s a chance Summer’s craziness could come back in full force.

Of course, we also have the little matter of Clark Bernard’s (Josh Burrow) death to address. It was an accident, but Summer and Dario (Jordi Vilasuso) could both go down for the cover-up. Summer’s word may not mean much anyway. When a relative of Clark’s shows up to sniff around, Summer could be in big trouble.

Keep watching for Alla Korot’s debut as Janet Bernard.   In the meantime, Days of Our Lives spoilers say Summer will make a surprising move. It looks like Summer will end up making a pass at Justin (Wally Kurth). We’re really getting into a weird area with this chick.

Is Summer trying to distract herself or does she have a sneakier goal she’s hiding?

We’ll have to wait and see, but DOOL buzz suggests that Adrienne (Judi Evans) will be somewhat puzzled by Summer’s advances. There are some interesting twists ahead as Summer’s time in Salem comes to a close. Lani’s (Sal Stowers) last air date flew under the radar, so she’s already closed out her stint at “Days of Our Lives.”

We may or may not hear an explanation for Lani’s sudden disappearance.

Fortunately, Summer’s departure will likely come with a bit more flair. Word has it Summer will cause at least one more uproar before she heads out. Stick with the NBC soap for updates on Summer’s impending exit.

So “Days” fans, what do you think about the news that Theresa will want to marry Brady ASAP? Will Brady go along with Theresa’s wishes? What’s up with Summer’s move on Justin? Will Summer’s murder cover-up come back to bite her?